An Interview With Victims Of The New Math 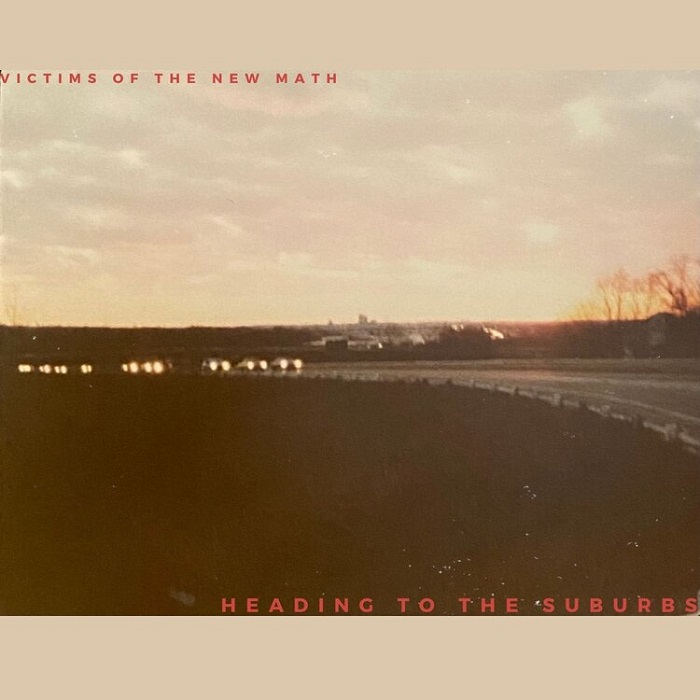 Victims Of The New Math are back with a completely refreshing EP that keeps to a heavy classic rock influence and fuses garage and indie rock with a major folk undertone that sticks to each song.

The Heading To The Suburbs album feels like a summer record, and just in time.

This record is like a diary that flashes memories and feels incredibly personal and alive as the songs are performed with heart and touches of psychedelia.

Acoustic based, rock driven, and with songs almost connecting to each other like a concept record does, the release has a wonderful pop feel that creeps just beneath the surface and you get this 90's indie rock tonality a lot of the time.

The songs swim around you and wash you away with the textures and vibes each time.

Victims Of The New Math like to dip their musical fingers into whatever style of songwriting they feel and it always proves to be such a great idea as songs are meaningful and have a sort of looseness that lets them flow.

This is clearly a passion project for the band as this is all for the love of the game and listening to the songs is probably as enjoyable as it was making them.

The songs feel like they are yours and that's pretty special.

These guys have managed to drop a record that has the feeling of looking through old photographs and it can actually bring up that emotion at times.

With such a great release, we wanted to have a chat with Victims Of The New Math to find out more of where this all came from.

TSWS: Okay so let's start with the Heading To The Suburbs EP. This record has a real classic rock tone to it that crosses into garage rock! Where did this EP come from?

V.O.T.N.M: First, let me just say thank you for the chance to talk about the new EP. I’m really excited about it!

I had just put out music in March, and really had no plans for anything new, at least not so soon. But I  had some inspiration and before you know it had some songs I really liked that were all ready to go. There’s a theme that’s kind of settled into my recent releases regarding my childhood in Ohio in the 70’s, and the sound that fits in my mind with those times is a mashup of early 70’s pop and the more sludgy, sloppy early 70’s album rock sound.  In trying to create any specific sound, my limitations as a musician come into play, providing that garage vibe to the tracks. So overall you get what I like to think of as a 70’s sound that never existed – it’s like the settings in a Wes Anderson movie – familiar, but not placeable.

TSWS: I'm hearing some great rock styles in there! Who are your actual biggest musical influences?

V.O.T.N.M: Some great classic bands, like the Beatles, Kinks, Stones, and The Velvet Underground. But also some really cool bands that came up in the 80’s/90’s indie scene, like Guided By Voices, the Flaming Lips, and Mercury Rev. I always felt those bands were taking that classic rock sound and updating it in their own weird ways, creating some really great and unique sounds.

V.O.T.N.M: My brother and I really love music, and he got us started in the 80’s when he got a guitar and a Casio keyboard. We tried doing covers, but learning other people’s songs was hard, especially if more than 3 chords popped up. So we started writing our own songs… And, with a few small gaps, pretty much never stopped. And what started as just a fun hobby has turned out, for me at least, to be a real lifesaver – writing and playing provide a great emotional and physical outlet, and helps keep me grounded. I’d be doing this whether I release the music or not.

TSWS: Now that things are slowly getting a bit better, will you be planning on any live performances?

V.O.T.N.M: I wish. Being a one-man act is great in so many ways – I have creative control, I can work at my own pace – but the one big drawback is I can’t recreate the sound live. I’ve done some insta live performances, which work well since I’m only doing 20-30 minutes...probably the limit of people hearing some stripped-down acoustic versions of my songs

I’ve really been into the latest Flaming Lips album, “American Head.” It’s pretty amazing – maybe their best since the 90’s.  And I’m reading this album-by-album guide to Guided By Voices called “Zeppelin Over Dayton,” so I listen to each record as I read and learn about it. I’m only in 1996 – I have a long way to go!

TSWS: Can we expect any music videos coming?

V.O.T.N.M: No. Again, I wish I had the budget for stuff like this, but nothing in the works for now…maybe one day though!

TSWS: This EP sounds like a big undertaking. What sort of advice would you have for other up and coming bands?

V.O.T.N.M: Work hard and be patient…it’s really hard to get traction in music, and success isn’t always a reflection of your talent or how good your songs are. Just keep playing, keep writing, keep being true to what you want to do.

TSWS: You wake up in the middle of the night starving. What are all of your go-to midnight snacks? (A question of character)

V.O.T.N.M: I’m always going to go for something sweeter at that time of night, so I’d say PB&J, snickers, and maybe a glass of milk…unless we have leftover pizza…pizza over everything!