An Interview With Winchester 7 & The Runners 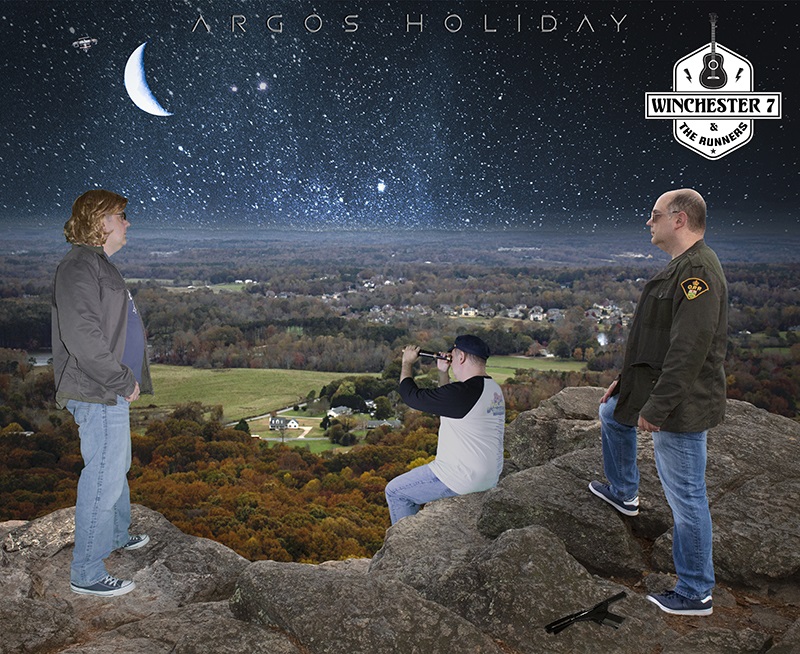 Winchester 7 & The Runners just dropped a full length album that ventures into a multitude of indie-rock fusing fuzztones with classic rock undertones and sprinkling pop over just about everything.

The Argos Holiday album is a massive and colorful record that feels great to listen to as it takes you through vibrant and fun pop rock with a certain swagger and character.

Loaded with musical and vocal hooks, the album does an excellent job of bringing sounds together to create something that's sonically all it's own.

It's almost like The Strokes meets Weezer meets Ween and most songs are even quite danceable.

The whiole record is a damn good time and really sticks with you as guitars have a terrific grit and dirtiness to them and that garage rock feel becomes anthemic.

This is a big album and the songs for the most part sound like a drive down an open road on a summer day.

There is a lot to the record that's a bit more than meets the eye and all kinds of influences peak out here and there giving the record a more rounded style.

With such a killer release, we wanted to have a chat with Winchester 7 & The Runners to find out more, so that's exactly what we did.

TSWS: Okay let's start with the Argos Holiday album. This record has some awesome energy

and a sound that crosses garage rock with classic rock and more in between. Where did

this record come from?

WINCHESTER 7: Thank you very much. It’s always great to hear when that comes

through. We had a lot of fun making it and set out from the start to do something different. Our

debut EP, Beyond the Dome, represented what we felt were our very best songs at the

time. Then, for our sophomore effort, The Forgotten World, we readied the best of the

rest and some of our newer work, resulting in sort of a transitional record.

So, by the time that we were recording Argos Holiday, we were really working from a

blank slate and purposefully set about creating something with a proper beginning, end,

Jack: Phil and I were pulling a runner and Win, here, came after us.

Phil: We would have gotten away with it too, if it wasn’t for…

Winchester 7: So, once we’d come face-to-face, they began playing and…I joined in.

Phil: We were better off together than apart, facing what ultimately awaited us back in

TSWS: So I'm hearing some various styles in this album. What bands really influenced you?

Winchester 7: The Beatles, the Pixies, the Clash, the Ramones, the White Stripes…

Jack: The Rolling Stones, the Record Company, the Strokes, the Black Keys…

TSWS: Did you guys play shows a bit before? Will you be focusing on live performance again

Winchester 7: Yeah, we do some gigs now and again; but, we also really enjoy

creating new content and have more recently established a production rhythm of writing,

Winchester 7: Post-pandemic though, I’m sure, we’d love to get out there and play

Argos Holiday for a live audience as we haven’t yet had the opportunity. I expect that

we’ll have some new ones ready by then too, so it’d be great to showcase them as well.

Jack: I’d be pleased as punch to see that many unmasked people in one place again

and not fear the bleeding apocalypse.

Phil: Our appearance on Francis West’s Firesides is in post-production.

Jack: We’re also in post for our first music video release of the year for our new song,

Winchester 7: Well, Frank and the crew over there were good enough to let us shoot it

on set. So, that helped quite a bit. But, yeah, Ever Said was written over the holidays

Jack: Tenet is week this.

Winchester 7: I like to travel and take some pride in my backyard barbequing.

Phil: He’s a wonder with a smoker.

Jack: This week is Tenet.

Winchester 7: It typically begins with the music. I’ll start to work on something and then

bring it to the group. We flesh it out together and the lyrics come after.

Jack: They’re usually inspired from a concept or phrase that comes to mind.

Phil: And sometimes we build songs around a bassline too.

Jack: Sometimes, la. That new one coming along, is it?

Do you guys get together to rehearse?

Jack: The mute’s a bit tricky, on occasion, but we do our best to keep fit.

TSWS: You have been dropping songs on Spotify since 2019. What kind of advice would you

have for other up and coming bands out there?

Winchester 7: Well, certainly plenty of rehearsal. But, I also suggest learning about the

business itself, it’s history, and some of the hard learned lessons that artists who have

come before you experienced to help save unnecessary missteps.

performance rights organization, sort out your publishing shares; and copyright.

Jack: And don’t forget to have fun while you’re at it. There’s that.

Winchester 7: Thank you for all of your support.

Phil: The best may be yet to come, but thanks for appreciating what we’ve done.

Winchester 7: And please consider subscribing to our YouTube channel where we pre-

release all of our tracks with our own brand of homemade music videos.