An Interview With Cardboard People 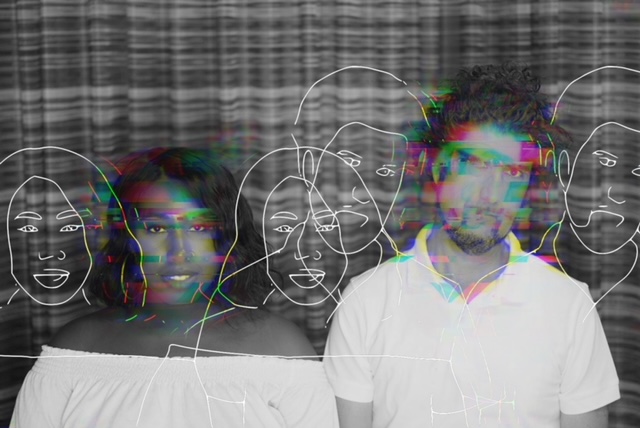 The latest single from Cardboard People is a fresh blend of indie-pop and R&B that comes through shining with soul and love.

"Every Little Thing" is a vibrant swirling atmospheric and slightly dreamy pop song that really displays a great passion for singing and for pop music production as well.

The track goes through phases of life and there are massive musical swells that keep things experimental and fun.

Vocally the song has tons of power with all kinds of harmonies while the dance beat rolls on and the sounds continue to build.

"Every Little Thing" has this undertone of a vintage alt-pop from the 80's but it doesn't take over....it's just there.

There is no way they didn;t have a blast making this song cause it's a really good time to listen to and always sticks to it's touches of psychedelia peeking through.

The music video for "Every Little Thing" is also super fun to watch and goes along with the experimental tripped out aesthetic of the song with all kinds of fun effects.

We wanted to sit down with Cardboard People and talk shop, so we did just that.

TSWS: Okay so let's start with "Every Little Thing". This track is a beautifully put together cross between indie-pop and R&B and it all infuses so well. Where did this song come from?

Jim: my goodness that is nice to hear! our tracks start different ways... in fact this song, i work with this amazing bay area artist called Andrew St James and i was attempting an "electro" sort of  remix of one his songs..then it all took a left turn, i went deep into a zone one day and it became this whole other thing.. then played it for Yunoka and she has this uncanny ability to write vocal parts that sound quite timeless and she just wrote right into my very strange psychedelic arrangement... This song was made entirely on a prophet 6 keyboard, Linn Drum, fender bass, and fender stratocaster on the guitar parts.

Yunoka: Well when I heard this track, it sent me into a cosmic loop. The bassline is super captivating and reminds me a lot “Night Fever” by the Bee Gees. My mom played a lot of Bee Gees when I was growing up, a lot disco honestly and I am always pulling from those influences. The song itself is about self love and being in love with every little thing about yourself. I hope that when people listen to it they feel as free as we did making it.

TSWS: The video for the track is also really well shot. Did that take long? Are you guys happy with the end product?

Y: We did this video in a day along with our video for “PuPpet”. We have really been on the DIY train in terms of creating content and visuals. Jim really pushed me to recognize my eye for creative direction. We shot this on an iPhone X, edited on an iPhone. Whenever i wanted close up shots, I would direct Jim on where to go lol

TSWS: When and how did this all start for you?

J: The really really short version is i heard Yunoka singing with another band i recorded with three female singers.  I didn't really notice till months later when i was mixing the song, then her voice jumped out of the mix in the last 10 seconds of a song and was basically everything i love about singers in a few short phrases.  I had to ask around to figure out who she was, and then i messaged her on facebook...then she kindly sang on a couple of other tunes i had written for labels and such, and then eventually we started collaborating..and it has been awesome ever since. Props to my dude Domino ( of the Hieroglyphics Imperium) because it was a couple of tracks I had made with Domino that Yunoka gravitated towards first, then we started finding tons of common ground. One of those is 'Bondage', that's out, that was our first single ever.

TSWS: Did you used to perform live? Will you be focusing on that when the time comes?

J: Yes, and yes, although we had only managed to play a couple shows before the pandemic. When things open up, we'll be right out of the gate.

Y: Yes, I cannot wait to get back on stage. I miss it and the human connection it brought to music. As a new band, I am extremely proud of the way we have been able to crave an identity on the internet and in social marketing. It's been a lot of trial and error but we are definitely figuring out our groove.

J: i'm a producer and operate out of my own studio in berkeley, and work with a variety of artists.

Y: I’m catching up on cartoons. I love watching cartoons because my brain literally needs the animation and colors. It really helps fuel creativity for me. I also spend a lot of time reading random facts and coloring/painting.

TSWS: I'm hearing some old school and new school  influences on this song. What band and artists really changed you?

J: New school things that i really like lately: Rapsody, SZA, Tyler the Creator specifically Igor, Avalanches. Old school: New Order, Prince, and about a billion more, i'm a total music nerd. But i hear some New Order and Prince in this song, and i adore both of them. I'm definitely DJing some records in my head while i work on new things, i grab stuff from all over the place, in my brain, and sorta convert into my hands with whatever instrument i'm playing.

Y: Where do I start lol I literally pull influences for any and everything. My mind moves jukebox when I start to create, matching up sounds to things in my mind.

TSWS: What's next for you. Anything new in the works even now?

Y: Geez, so much. We have a new single dropping in January featuring some guest musicians. Tons of new music and music videos. Jim and I are constantly creating so there is never a shortage of Cardboard things from Cardboard People :)

TSWS: This song and video is a big accomplishment. What advice would you give to up and coming artists just trying to get heard?

J: I don't believe in success per se, I believe in doing what you believe in and never stopping. if you do that, years into it, cool things will have happened but you won't even notice, you'll still always feel like you're "trying" to "make it". I love the feeling of being on an incline up and not knowing what will happen. Honestly the best thing you can do is find people you really like and create with them and make projects, give yourself stuff to get excited about. The internet has demonstrated that there will forever be this bottomless pit of songs and shows and everything else, so worrying too much about where your stuff lands in that giant pile is really pointless. I think the definition of success has been permanently altered by the internet, basically. And never be afraid to reach out to people you are a fan of. I love it when i get messages from people that have heard our music or anything from my life. I always respond and sometimes end up working with those people. And, i've reached out to some of my heroes and had that happen too. You just gotta go for it, be fearless, make stuff, put it out there, use the tools available to you, and don't even worry at all about what happens, because whether it's gangbusters or crickets, years will fly by and everything will wash out with the tide anyways, and life is just too short to get hung up on it. The best way to make music that will connect with people is to be so purely honest and yourself in what you say or how you say it, that it's like a really good, intense conversation, that you truly enjoy. If you do that, it will work, in some way or another. If you've ever had that experience of being at a party and you end up talking to someone late, and talking more and more, and it feels like the conversation was kind of destiny..that's what i think a song should feel like. Songs that really move me, i just don't want them to stop, they have a feeling I want to live inside. It's really hard to do this consciously, but this is why Cardboard People is such a good band. Nothing is forced, each song is kind of a conversation between Yunoka and myself, and we're both super open minded, and not too precious about what we say. But like those late night conversations, we each want to impress the other person at least a little, so we're staying engaged, looking each other in the eye. It's a great way to collaborate, I highly recommend it!

J: A giant thank you and please stay in the loop, it only gets better.

Y: Thank yall so much for joining and loving the music. We appreciate every little thing and all the support !