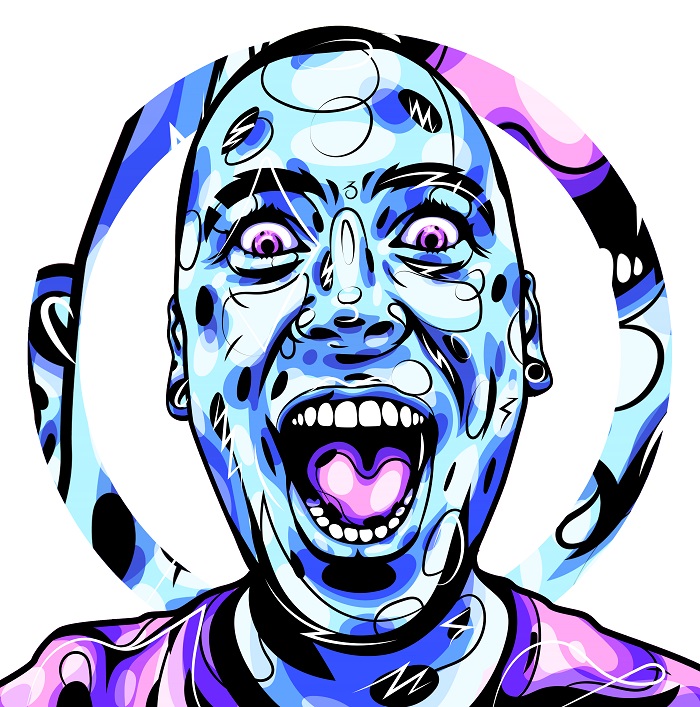 Breaking The undertow comes back around with a super powerful and anthemic alt-rock track that breeds a pop-punk sound and an absolutely huge chorus that breaks into a metal opus and serves as a testament to the entire Breaking The Undertow project.

If there is a song that represents everything that this project is about, it's TXPYR".

The track is a precise and shining example of the identity of where this all came from.

Here's the thing about this band. It's pretty much one person. One person that performs, writes, records, and releases an opus of singles that all come from places that existed in his life and from there were all woven into song.

If there is a deeper meaning behind music in general, that is it.

We've talked with and reviewed a number of outstanding musical works churned out from this band and each time, things get more polished, bigger, and  with less walls built around them.

And now we reach "TXPYR". The pinnacle of all the works previously released and it's an epic sonic masterpiece of emotion and precision.

Guitars create spacious tones and distant lands of rock presence while vocals belt out until the screams come in.

With this, we obviously had to have a fresh chat with the artist to get an idea for where this was sparked from.

TSWS: Hello Trevor and welcome back!

So happy to be back on the site! Thanks for continuing to support and write about my music!

TSWS: Let's start things off with the "TXPYR" single. This song hits pretty hard. It's got some melodic sections but also heavier ones as well. As always brutal honesty is the name of the game! What's this song about?

My new song “TXPYR” is meant to be a piecemeal appetizer tray of everything I’ve done with Breaking The Undertow to date. I wanted soft and melodic, quirky, huge choruses, heavy riffs and screaming all rolled into one convenient package. Lyrically the song deals with the tribulations of a creative introvert learning to live in the ‘real world’ as opposed to his own head. It’s about learning to strike a balance in life between being responsible and being expressive. It’s about the arbitrary rules and fictional frameworks that make up current society. How much should we assimilate and conform to these? How much should we push back? At its core, this song preaches the value of individuality above uniformity and having the courage to be true to yourself in a world that penalizes such honesty. Finally, this song is about the malleability of identity. All people are ever-changing and complicated. Let’s shed the labels we put on ourselves and others and learn to prioritize personal growth above fixed identity. To quote a lyric from the song; “Let’s turn the tide.”

TSWS: Would you say that you use your music as a way to let out things that just need to be let out?

Music has always been my outlet. It’s my therapy. It’s a way for me to communicate and speak my mind in a way I can’t do under normal circumstances. Interestingly, my music itself has become the most urgent thing needing release as opposed to the topics I write about. I’ve become compulsive in my need to write and record music; if I don’t, the ideas I have will accumulate and just bounce around in my head until I go nuts. I actually start getting anxiety when I come up with a good idea for a song. I know I won’t be able to stop obsessing about it until it’s out in the world. Right or wrong, I think about making music as on par with any other of my basic human needs. If I don’t eat or sleep I’m miserable. If I don’t make music I’m miserable.

TSWS: Tell us about your setup. Your sound is always so polished! Is it a home set up? What do you use to record?

Breaking The Undertow is purely an at home recording project. I do all the recording myself on my MacBook Pro. My hardware is pretty basic. I use a Focusrite Scarlett 2i2 two input interface and an Audio Technica AT4040 for vocals. All my guitar tracking is done direct in. I use Pro Tools 10 and Logic Pro X as my main DAWs. Steven Slate Drums 4 is responsible for my drum tones. I use Overloud’s TH2 amp sim for all guitar tones. I also use a variety of software instruments from Logic Pro stock stuff and Native Instruments. I moved into my Dad’s unfinished basement last year which has been PHENOMENAL for vocal recording. I haven’t had to do any soundproofing at all. My setup moves with me wherever I go. I like being able to record everything myself at home. It makes things really easy and efficient for me. Oh, also, my recording area is usually covered in my four year old’s drawings and toys, which I love!

TSWS: Do you have a favorite guitar you use to record or write?

The only guitar I’ve used to record BTU songs is my Schectar Hellraiser. It’s all I need.

TSWS: Have you thought about a new video for this one?

I’ve definitely thought about doing a video for “TXPYR”. My wife Laura, who made the video for my song “Butterwheel” is going to shoot it. It won’t be out in time for the song release, but hopefully soon after. She’s always got great ideas and I can’t wait to see what she has in store for this one!

My favourite thing about creating music is watching a song grow from a little tune I might hum to myself to a fully realized arrangement and recording. Sometimes I almost miss the process because I have so much fun doing it. All of a sudden it’s done and I’m like ‘how did I get here?’ All of a sudden I have this thing that once only existed in my head and now can be shared with other people. Crazy!

TSWS: Do songs come to you randomly or is it something you sit down and churn out?

I find the best songs I write are the ones that just come to me out of nowhere. I’ve often sat down to write songs and come up with nothing. When I least expect it, a melody will pop into my head and I’ll record it on my phone voice memos. Then I’ll come back to it when I have some time and I’ll flesh it out and write lyrics and add chords. I tend to stockpile ideas, keep them on the back burner, and wait until I find a place where they can fit. This has generally been my process for all the BTU tunes. When I used to approach writing songs, I would think ‘it needs to be a rock song!’ I don’t do that anymore. The quirky little melodies I come up with while driving or around the house are super infectious and catchy and make for more memorable songs. Then I produce them like rock tunes. I never force a song. I’ll reach a point where I have enough great parts that fit together and I know it’s ready to arrange and record that one.

TSWS: Who is someone you really look up to in the musical world?

My biggest musical inspiration is my brother Spencer Heaslip. He goes by the producer name Taabu. He’s in an entirely different genre than I am but I respect him a lot and I’m a huge fan of his work. He’s got a record called “Bellows” out now and it’s sick!

TSWS: What bands did you grow up listening to?

My earliest memories of listening to music was the Oldies station with my Dad and some mix cassette tapes he had in his car. The stuff I really loved was The Sweet, New Order, and Depeche Mode. He played a ton of cool stuff and I think that helped set the tone for my love of music. Later on I got into stuff like Blink 182, Linkin Park, Billy Talent, Silverstein, From First To Last, Alesana, the list goes on!

TSWS: Did you ever think you'd be cranking out songs like this when you were younger?

I think I always knew on some level that making music is a fundamental part of who I am and how I live. I believed I would always be making music, but I could have never predicted feeling this great about the songs I’m putting out. I feel really proud of what I’ve done with Breaking The Undertow and I’m positive my younger self would approve. I made a ton of music when I was younger both in bands and by myself. I feel now like those songs always missed the mark in some way. Either they were accessible but boring, or they were interesting but too outlandish and experimental. I feel I’m right down the middle now. I have the right mix of accessibility with my own quirkiness sprinkled in. It’s radio friendly but still true to myself; at least that’s how I see it.

TSWS: Do you have a full band that you rehearse with?

, but it didn’t work out that way. I’ve been in bands in the past and I’ve played plenty of shows. I won’t rule it out, but right now I’m really enjoying making my songs at home on my own terms. Writing and recording is where my true passion lies anyway. Playing shows would be fun but secondary to me.

TSWS: It's the end of the world. You can only save a certain amount of people. Who do you save?

TSWS: How long does it take you to complete tracking a song?

It actually doesn’t take me long to record when I’m able to. I usually spend half an hour demoing out the guitar track. Then probably 3 hours for drums. I’ll usually do two sessions of guitars and two sessions for vocals on average. Having said that, it actually takes me about two months to finish recording a song for various reasons. One of which is I commute to work an hour and a half each way, five days a week. I live in a house with 9 other people with varying schedules. So it’s hard to find time and space to record. I make the sessions count when I can get them dammit!

TSWS: Do you mix and master your own stuff?

My brother Taabu (Spencer Heaslip) who I mentioned earlier does all the mixing and mastering for my tracks and he’s a beast! I always sit down to watch him mix and to give my input and he bangs it out in mere hours. He works insanely fast and his mixes and masters sound incredible. His mixes have become an integral part of the Breaking The Undertow sound and I couldn’t be more grateful for his incredible contribution.

Thanks again for taking the time to talk to me about who I am and what I do! It’s greatly appreciated!