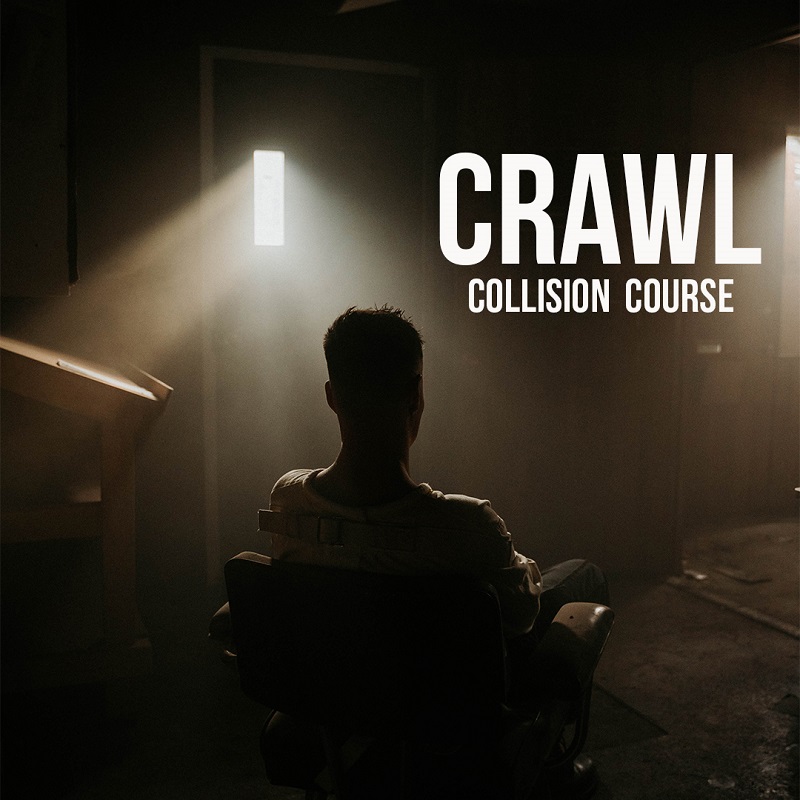 Collision Course returns with a new single that brings their bright rock tone and sonic edge to a heavy hitting radio friendly feel.

"Crawl" is a non-stop action alternative rock single that explodes into a huge chorus that shakes the ground and sinks into your brain.

The song brings a ton of grunge to the table and does it with style and swagger that feels like something you;ve heard on the radio before.

Collision Course is known for their catchy pop rock with that sharp edginess that borders on a certain darkness and aggression but keeps the hooks along with everything else.

The music video for "Crawl" is a killer one as the band rocks on and you can see the presence and energy the band has in a live setting which really makes you want to see these guys play live.

We've premiered singles from Collision Course before and "Crawl" doesn't let down for a beat.

The band releases songs with passion and a trash factor that just feels good.

We sat down with the band to get into it.

TSWS: Okay gents! Congrats on the new single! Lets begin with "Crawl". This track has a nice heavy melodic alt-rock sound but holds true to a bit of and edgy sound too. Tell us about this one. What's it about?

Thank you! Lyrically I wrote the song about the feeling of being on stage playing music and how the high of that doesn't compare to any other type of high I've had before. Me and the guys really wanted to get the electric feeling of that high across with the energy of the music!

TSWS: Are you all happy with how it came out? (You should be)

We are, we really wanted to release it quite a lot sooner but unfortunately due to covid we had to bite the bullet and release it later than intended but hopefully everyone still digs it!

TSWS: We've already talked about how it all started for you guys. Have you been together for rehearsals?

With the restrictions here in British Columbia we've been all trying really hard to keep everyone safe so we've just been chatting over skype and writing and recording separately, thank god we all have recording gear!

TSWS: The video for "Crawl" was killer! You guys always seem to put together some really high-quality videos for your releases. Do you have to "go to" company or person for that?

Thank you! We actually did it all our selves! Jeff and I directed and produced it and then we hired our friends Eugene, Tommy, and Mark to film as they are killer at it. It was quite hectic as I think we underestimated how much it takes to make a music video but we like to think that we pulled it off.

TSWS: How do you guys record your songs? Is it at a studio or do you do it all from a home studio of some kind?

We normally hit studios but we're currently doing demos for pre-production at homeso we can all stay covid safe!

TSWS: How do you feel the pandemic has affected you as a band whether positive or negative?

It definitely has had a negative impact on us but we like to focus on the positive and feel that it's really proven how much we're willing to fight to take this band to the next level no matter what, and if we can bounce back from this, chances are we can probably deal with any challenges ahead!

TSWS: As a band steadily dropping professional content, what are your thoughts on Spotify? Do you feel like it's a terribly bad thing for artists?

Not necessarily, there's tons of great music and exposure on the platform, but like all artists we do think it would be nice if streams did pay out a bit more, especially in a climate like this where artists can't play shows currently.

TSWS: Have you been selling records or downloads?

We have a band camp that we've been selling our songs on! You can check that out at collisioncourse.bandcamp!

TSWS: What is everyone listening to right now?

As usual a lot of AudioSlave, Black Rebel Motorcycle club, Arctic Monkeys, but we've also been thinking of doing a fun little Slapshock cover in Honour of the late Jamir Garcia, as Jeff really digs their stuff and has ripped up some covers of their stuff in the past.

TSWS: You must really miss playing shows. I know you had planned on possibly touring Australia or the U.K., are there still plans for that?

We do! Like a lot. We're hoping that once more vaccines roll out, we will be able to still do so, at this point it's just a waiting game unfortunately

TSWS: Will there be a full album or EP coming in the future?

We're hoping for an EP this summer and an album in early 2022, at this point we will just have to see how this pandemic plays out and hope for the best as usual!