An Interview With Crosstalk Club 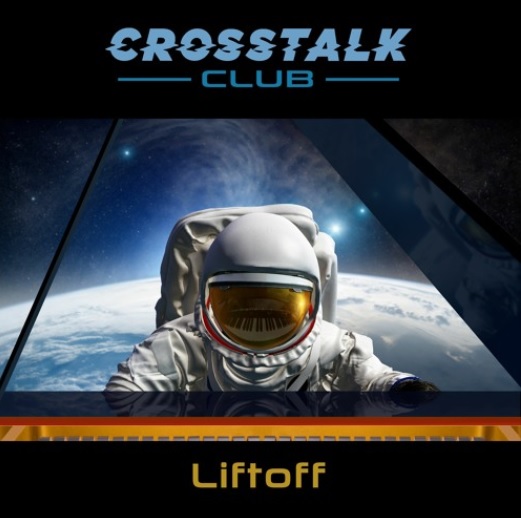 The Lift Off album feels warm and rocks with a great edge while keeping true to its roots as guitars come through colorful and alive, and vocals have that contemporary aesthetic.

Elements of pop punk show face and get you up and moving to crunchy, up beat riffs and attitude.

The songs showcase an array of refreshing rock and all with pop undertone in the lining of just about every one of them.

A bright and vibrant sound gives hints of the band's presence and really makes you want to see these guys live. Maybe that'll happen one day.

For now the Lift Off album has provided us with a group of killer tracks to rock with.

One of the first off the record is one dubbed "Psychic Girlfriend". A track that grabs you from the get go and utilizes the band's knack for writing rhythmic grooves with layered harmonies and organs filling the atmosphere.

The single is an excellent representation of what to expect from the album itself.

With such a huge release, we wanted to sit down and have a talk with Crosstalk Club to find out where all of this came from and how it all began for the band.

TSWS: Okay so let's begin with "Psychic Girlfriend". This track has a fresh and bright folk rock feel with plenty of classic rock infused. Where did this track come from?

The words and music actually evolved separate from each other. The main chords were originally a warmup riff I'd play while soundchecking cover gigs, so that classic vibe carried over. After a bunch of people told me, "that's catchy, what song is that?" I figured it was time to make it into something. Lyrically, the idea was something I overheard at a party. A bunch of people were commenting about a TV commercial for psychics giving relationship advice, and someone said, "no one would date a psychic, because who wants to be with someone who can read all your thoughts?" People laughed -- I wrote it on the back of a beer label and brought it home. I sometimes combine skewed-view lyrics with upbeat music, and these two paired up well. TSWS: I'm hearing some variety in your releases style wise! Who are some of your biggest influences as a band?

Thanks for noticing! Growing up, I always loved how Queen threw a truckload of different styles into their songs and made it work, so I try to emulate that. I'm a fan of Ben Folds and Andrew McMahon's piano arrangements, and the stories they tell in their songs. Frank Turner is great at keeping an edge in his songs while using mostly acoustic instruments. Add some bounce from OK Go and a little irony from Fountains of Wayne, and that's us.TSWS: Will there be a video for this one?

We'll see how fast that happens post-shutdown, but I've started storyboarding it. Over the last year, we put out ten lyric videos on our YouTube and socials to let people know "the album is coming!" so I'm looking to hone my skills for some new music videos this year. TSWS: What's next for you as a band?

Take the lessons we learned, and make it better. The last recording project I was involved with folded before everyone on the planet had a streaming account, so I spent a lot of time learning how to record ourselves well, how to release, and how to keep those connections to your fans, even when you can't see them for a long time. Now that the music is finally available online, we're excited to find new fans outside our local area.
TSWS: Are you playing multiple instruments on this release?

I play various keyboards and bass on the album. Geddy Lee, I'm not, so a friend is joining as a full-time bassist.TSWS: How did this all start for you really?

The guys and I have been working for years in the New Jersey bar-band circuit, playing mostly in various cover bands, and a few original bands. I was starting to backlog some original tunes, and really wanted to get them released. So I thought, naïvely, I'll just get some friends together, record an album, and play some shows. Well, best laid plans, and all that. When the first studio didn't pan out, I learned to self-record. A hard-drive crash forced us to restart -- backup those computers, folks! Another studio ripped off our mixing budget and held our mixes for two years, so our drummer Steve stepped up and mixed all the songs from scratch. I ended up in the hospital twice for my heart, once for cancer. I got exposed to Covid, and then we all experienced a year of shutdown. Each delay was frustrating, but it just made our resolve stronger to get this completed. TSWS: Who are you listening to right now?

I've been a Matthew Sweet fan for a long time, so his new album Catspaw is a must. As far as newer artists, I've been listening to Superbloom from Misterwives and Strange Days from The Struts. And I'm a fan of most anything Green Day and The Pretty Reckless put out, so their new ones are on repeat. Also, every few months, I'll binge a bunch of Stevie Wonder and have him take me to school on playing keys.
TSWS: What are you doing when you're NOT working on music?

Spending time with my family, squeeze in some social time with friends, which is important, because you can spend a lot of your musician time alone, either practicing, writing, or staring at your computer. Summer is the big season here on the Jersey Shore, so I'm hoping to get some beach and boardwalk time in as well. TSWS: This track feels like a solid undertaking. Any advice you'd give to other up and coming bands out there?

Something I've learned, both on this track and making the whole album. Always plan with a goal in mind, including deadline dates. But always make sure to reassess along the way, so if/when things go sideways, you can adjust, rather than scrapping the plan and wondering what to do next. TSWS: Now that things are slowly getting better, will you be planning any live performances soon?

Absolutely! Here in New Jersey, 2020 has been pretty rough during the shutdown, especially last year. Now that people can start to venture out, live shows are definitely in the works. I can't wait to get out there again! TSWS: Before we go, what would you want to say to fans of the music?

Thanks to everyone who stuck with us during our quest, came to see us live, watched the videos, and offered support for a long time! And to all our new fans, welcome to our "Club"! We're excited to have you with us.