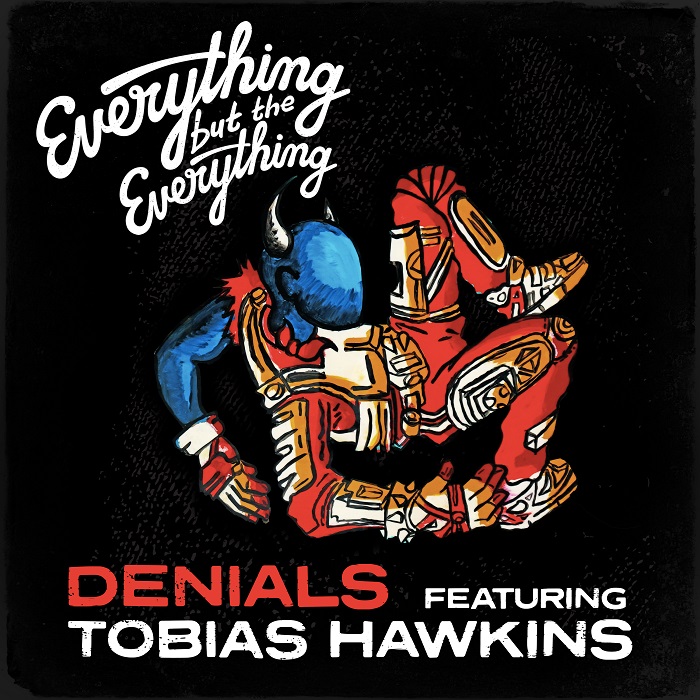 Everything But The Everything teams up with Tobias Hawkins for an ambient alt pop banger that feeds off of emotion and boasts a heavy cinematic tone that breathes and sways it it plays on.

There is something familiar and yet compelling about "Denials" that touches on a certain nostalgia at times with retro synths underlying layers of textured pop sounds, live drums and loads of vocal harmonies and hooks.

This track does indeed feel like it belongs in a film of some type and it does have a youthful energy and a swirling style that surrounds you with the sound and can really suck you into their world quite quickly.

The song has a huge soundscape and a passionate approach vocally that becomes something that crawls under your skin as the lyrics give off a brutally honest feel.

This was powerful and kept to an almost 90's underground aesthetic that holds true to the edginess of the song and lets it all come through with a sharpness that lies deep within the ambience of it all.

This single feels big. It's completely lush with sounds that swim around in the air and yet still has a deep rhythm you end up bopping your head along with from the first few seconds on.

You can hear there was a lot that went into this track and the mix is spot on as its many layers of sounds sit atop each other nearly perfectly and it all comes together without a hitch.

There is something almost graceful about "Denials" and it speaks heavy volumes for the musicianship and ability to adapt and write songs in multiple genres for the band.

Everything But The Everything is no stranger to us and this track is a beautiful step in the right direction for sure.

Everything But The Everything and Tobias Hawkins seems like a match made in alt-pop heaven and "Denials" is the proof of that.

So dig in deep on this one. Put on your Doc Martens and your eyeliner, hone those youthful teenage feelings that drove you, and turn this song up.

With this release, we had a chat with Everything But The Everything to see about where this all came from.

TSWS: Okay so let's begin this one with "Denials" of course. The song has a killer alt-pop sound to it that reaches into a nostalgic place for me. How did this track come about?

This track started when I sent the bassline demo to Andrew Gomez(NRVS LVRS) for a synth contribution. His "Moog magic" immediately charged the atmosphere with something dense and dark. His sound is what really makes the track special in my mind. Usually I send him finished songs to see if he hears any layers he can add. I wanted to try something different this go around so I sent him the bassline building block where every song begins. While I waited for his response I started to work on my own guitar melodies. I came up with something that felt good. Once he sent back his contributions, to my astonishment, they perfectly lined up! They complemented one another. At that point, I knew exactly who to give the track to for vocals and sent Tobias the rough demo.

TSWS: Tobias Hawkins teamed up with you for this track which turned out to be something special! How did this end up happening?

This is the fifth single Tobias and I record. Sophia Prise and Tobias were the only two singers on our debut Dream EP. I wanted a different singer for each song but I was having trouble locking down two more vocal contributions. I mentioned my dilemma to Tobias and he offered to take those songs over. He ended up singing 3/4 of the Dream EP. With the Rockn Roll Is A Feeling EP, I finally got my wish and got four different singers. I gave Tobais what became "Can't Allow". When we come together good things happen, so I'm going to keep giving him songs until he tells me to stop.

TSWS: Can we expect more collaborations from Everything But The Everything in the future?

Absolutely. I have a new collaboration in the works right now with Elder Brycen of San Diego's Golden Plates. He's been busy himself recently releasing his EP, The Light, the single "Nobody Like You" and his most recent track "Alive." I'm excited about what direction he takes the music in.

TSWS: Are you guys working on that EP or full length this year?

I have my heart set on releasing an EP at the end of the year. I doubt it will be an album since I'm going with the strategy of a trickle of singles to keep our name out there. An extended EP with six or seven songs is what I'm beginning to strive for.

TSWS: It seems like you are always writing and releasing now. How do you find the time to get all of this done?

I make time to write during the day. An hour before work just like most people schedule time to go to the gym. If I don't wake up early, then nothing gets done. Just chipping away at it on a daily basis.

TSWS: How do you record your material? Is it a home studio set up or do you get time at a big studio?

I record with my friend Rex Sherlverton(Bella Vista, Vue) at his space in Secret Studios SF, which I would describe as a part DIY studio, part pro studio. It's pro tools, compressors, gizmo's and tricks up his sleeve. His experience with recording, music structure and sound are invaluable to my being able to move at the pace I need.

TSWS: Do you mix your own stuff? The mixes are always excellent!

Again, Rex steps in and handles the mixes, I chime in and we'll talk it out. There's compromise, debate and a chase of ideas with every step. It's fun.

No, for financial reasons. The strategy part of how to get one's music out feels comparable to building a race car on a video game. Where one is only given X amount of credits to enhance the car's tires, suspension, turbo, NOS, etc. It's the reality that more on this, means less for that.

TSWS: It seems like you are able to write in multiple genres. Is this something you planned?

When I write I play by feel, meaning there's no real concept or musical strategy. I just pick up my bass, try to turn off my mind and just play. It's gibberish really. It's like saying every word that comes to mind, in no particular order, and hoping you say something special. When I catch a snippet  of something, I'll zero in on it. Inevitably, a melody comes out that brings back a feeling from the past. Like the feeling I got when I heard Cindy Lauper's voice in the Goonies. Or the first time I heard Tool. I'll close my eyes and go with it.

TSWS: What can we expect next from you?

TSWS: Do you write the songs first, then find people to collaborate with?

Yeah. I'll try to get the song written as far out as I can for two reasons. The first reason is when a song really takes shape, I'll begin to hear a certain type of vocal performance and then I begin to write a shortlist of vocalists to approach. The second reason, it's more professional to approach a singer, especially a new possible collaboration, with a track that they can immediately get on board with as opposed to a rough demo or song concept. I learned that the hard way. I am guilty of getting a little too excited about ideas and sending them prematurely.

TSWS: Anything you'd like to add before we go?