An Interview With Gnar Wail 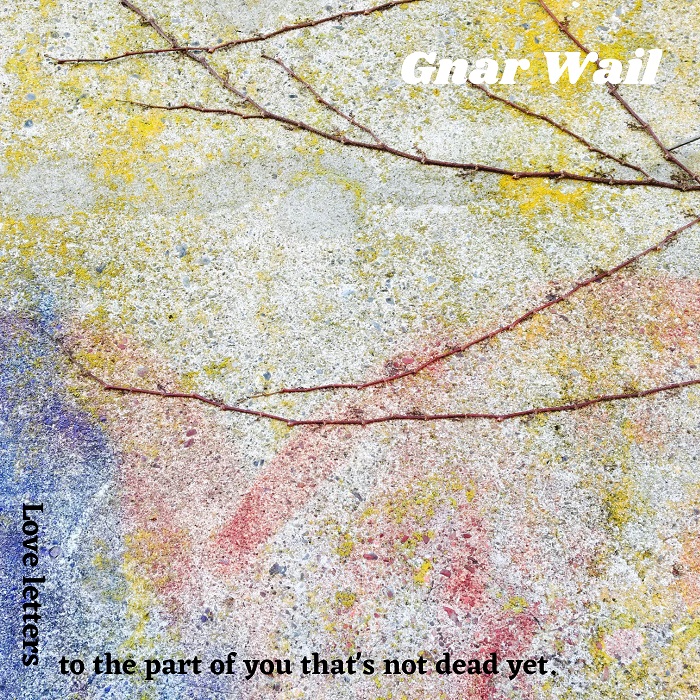 A new album release from Gnar Wail brings a classic alternative rock and grunge feel back with a aset of personal songs that all feature song alluring guitar work and melodic vocals that all create this almost fuzz tone soundscape and with each song off the album, there is something a bit new to bring to the table.

The album is called Love Letters to the Part of You that's Not Dead Yet and that pretty much says it all now doesn't it.

The record is brimming with soulful guitar leads and gigantic riffs along with subtle sections that build into rock explosions and choruses that stick with you for days.

The songs have a way of feeling almost nostalgic and it's that songwriting style that does that. It feels like late 90's alt rock and it's also that very honest and straightforward lyrical approach that does it too. it all seems so relatable at times and this lets the music become yours.

That honesty can be hard to perform and even hard to say most of the time and this record, at a certain point, starts to feel like a concept album.

Like these songs are actually chapters in the songwriters life and this was the way he was able to just get it all out.

This makes it graceful. And it is a gracefully performed album. it has its heavier parts but it also has softer parts and songs that you can really dig into and pick apart. Which can be fun to do with an album like this one honestly.

You want to know more of the story and you can't help but let memories of your own pop into your head at times.

It's got a very genuine style to it sure, it can be dark or a bit brooding but that's life.

If only we all had an outlet like this artist does to free the emotion into the air like this. And this is what I mean by graceful. Yes the performance sure, but also the words.

With such and in depth release, we wanted to have a chat with (Daniel Rainwater) Gnar Wail and find out where this all comes from.

TSWS: Okay so let's start with the Love Letters to the Part of You That's Not Dead Yet album . This record has a very cinematic alt-rock style to it. Where did this record come from?

I pretty much just pulled it out of my ass, or maybe a combination of my ass and my heart.  I’ve been writing songs ever since I picked up a guitar…..which I guess was around 17th yrs ago now….I used to put pressure on myself to write stuff that was “good” but these days I just try and get out of the way…which results in a lot more stuff getting written and the the less i judge it or try and make sense out of it the "better"/more authentic I find what comes out to be.  So yea, this record came straight out of me in a very honest and direct way.

AMy biggest influence for this record was Dinosaur Jr. but that's a funny story actually because I've never really listened to them.....So I was inspired by my own idea of what Dinosaur Jr sounds like.  J Mascis lives near me so I see him around a fair amount...I think that was part of it.....like I was influenced by being in proximity to him somehow.  But also I had a new Telecaster for a lot of the writing process and that was really influential for sure, whenever you have a new guitar there's something magical that happens because all you want to do is play it and a lot of new idea's come out.But over all my musical influences throughout my life if I had to name names would be a lot of the regular answers such as; Metallica, Red Hot Chili Peppers, Linkin Park, and of course Zakk Sabbath....not to be confused with Ozzy's first band by a similar name.

TSWS: So how did this all begin for you? When did you really fall in love with music?

When I was around 12yrs old I heard Linkin Park on the radio and instantly got goosebumps....no music had ever invoked that sort of feeling in me before and I've been chasing and trying to capture that feeling ever since.  Prior to that though I had always been interested in playing guitar, my Uncle was a badass bluegrass player.....I remember always loving the sound of acoustic guitar....but I didn't really like all the fancy flatpicking stuff...I just really liked the sound of open chords being strummed. Haha.

Well I've released another two records since Love Letters came out.  The Saint Brain B-Sides and just recently an EP titled River Bottom Drag.So Yea, I'm just continuing to go with the creative flow, one thing I love about art is that the creative process in my opinion has to keep changing otherwise you get sick of it because it becomes automated and disconnected from being true expression, So I just try to do the work of showing up and then like I said earlier from there it's all about getting out of the way.  So what 's next for me as an artist is more showing up and practicing.....getting better and better at getting out of my own way.

It's really just the pressure of life, I spend a lot of time working on myself or maybe a better way of saying it is that I'm pretty active when it comes to decompressing my emotional, physical, and spiritual bodies...Nothing worse than a jammed Chakra am I right;)!?...but yea, I don't think any form of therapy actually releases the stuff we hold onto, more like a good therapy technique wakes you up to what your holding down and then you seek artistic expression for the sake of transmuting/releasing that which was repressed and festering/"Jamming up your north node".  So literally my motivation and inspiration for writing a song comes out of my own depression as it builds to the tipping point due to whatever level of repression I'm unconscious suppressing....I'll do a bunch of breathwork or fast for a couple of days and then boom a new song starts to come together and I'm stoked out of my mind about it....but you know it's like I'm stoked because I like this song I wrote and I'm proud of myself for creating something... but underneath that I'm stoked because I just worked through some emotional thing and so the stoke in a way is just because I'm not emotionally constipated anymore!

I work as a PCA, (Personal care assistant) it pays the bills and I'm able to bring a guitar and also mix/work on music in between the personal care assisting part.  But I also work with people in the field of breathing and overall health - So basically besides music my passion is helping people more skillfully operate and inspire their meatsuite.

I've been listening to this kid called Kid Brunswick, he's in his early twenties probably so he is actually a kid, Mike Shinoda from Linkin Park helped produce one of his songs...so that's how I found out about him, he's got some pretty interesting stuff.  Also In Flames, and then a lot of Sufi/middle eastern music....Oh and my newest release has a song called Abandon Hope, I've been listening to that one A lot!

No, that's a whole other can of worms.  I'd need a band and also the time to get together with said band to rehearse.......I'd love to though!

TSWS: This release seems like a big undertaking. What kind of advice might you have for other up and coming artists out there?

For me it's always been about just focusing on learning about myself, if you know who you are then you know what to do and you also know WHY you're doing it....meaning I think something is only hard if it's not actually aligned with our deeper life purpose.  So align with your purpose and be open to it being different then what you had originally thought and then you'll be good.  It's still going to be hard but when we align with our purpose the hard parts become somewhat "awesome" because we have the bigger perspective and context of what we are actually doing and even though it's a lot of "work" we can actually rest in the peace of mind that comes from being so clear with ourselves.  And then you just have to really prioritize deep focused practice, where you get lost and hours go by and you've been just hammering it out.  I learned about that with guitar when I was young and it's definitely carried over now as I've spent that sort of time learning and getting better at recording and doing the production side of things.

TSWS: Before we go, what would you like to say to fans of the music

I'd just quote Eddie Murphy from his SNL Buckwheat sings sketch where he says "Buy my record, Otay"!