An Interview With Johnny & The Brewsers 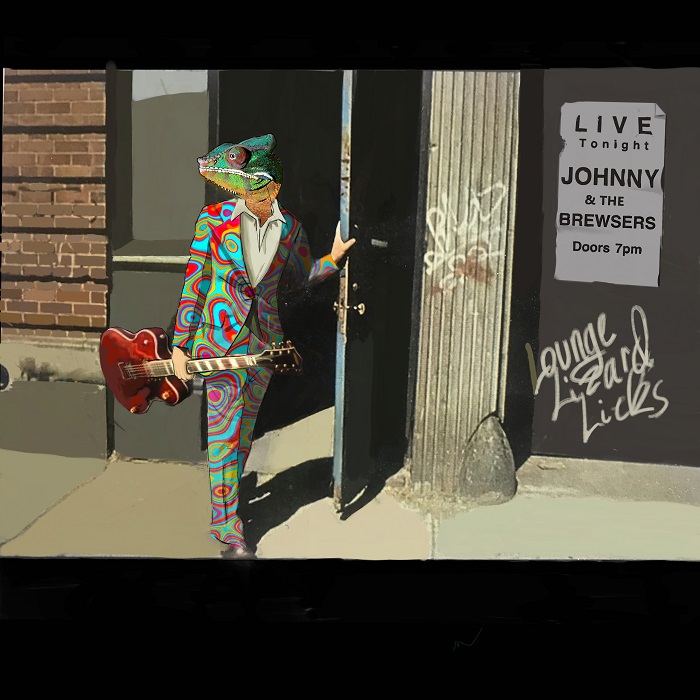 A fresh EP from Johnny & The Brewsers rocks with a brut swagger and an alternative undertone complete with bending guitars and melodic vocals.

The Lounge Lizard Licks EP is full of outstanding riffs and plenty of musical hooks to get you reeled in quickly.

The attitude is a major part of why this works so well. The band performs with a love for their craft and it almost feels like a live show.

As a matter of fact, it makes you want to see these guys play for sure.

There is a ton of character and style in the singing alone let alone the guitars bringing that extra edginess to everything.

They make you think of the old school days where you'd walk into a club and see a band crushing it on stage through the smoke and people.

Within the walls of this EP are some personal tracks and a delightful array of genre-bending that helps make this release unique, but familiar and comfortable as well.

One of the great things about this EP is that, although the songs get a bit diverse, there is a staple sound you get from Johnny & The Brewsers and it becomes somewhat addicting.

You do certainly get a lot from a short record and it's completely clear this band absolutely loves what they do and that shows in every note played.

With such a killer EP, we wanted to talk with the band to find out where this all comes from and what may be next for them.

TSWS: Okay so let's start with the Lounge Lizard Licks EP. This record has a gritty but fun rock feel to it. Where did this record come from?

It started out with an idea that I had been playing around with for a while, on the guitar, that would eventually become the opening track on the EP, So Low. I had developed that song to the point where I wanted to record it. I downloaded a free DAW and bought some mics and an audio interface and just went for it. I had never engineered a session before, so I was  making it up as I went. I was also extremely fortunate that my brother, Adam  https://www.instagram.com/sonicbrewmedia  who is a great recording engineer, was just a phone call away, when I got really bogged down. He shared his vast knowledge with me. He also did a brilliant job mixing and mastering the EP.

I got such a buzz out of recording So Low, that it just inspired me to keep writing and I decided that I'd record an EP. The other three songs just came together over the course of writing and recording. The Single, Day In The Sun, came about when I had restrung a beat up, old Telecaster copy that I had been learning slide guitar on. I was running through a standard blues slide run and I brought up the tempo to 150 bpm and I really liked what I was hearing and how it felt. I had the entire song written and recorded over two days. There were three other songs written during the recordings, but I decided to keep them back for the next one.

TSWS: There are a number of rock sounds on this track. Who are some of your biggest musical influences?

I listen to a lot of different stuff. Rock, Blues, Jazz and Soul. Classic 60's and 70's Rock would be a huge influence on me. Everything from Gene Kruppa, Buddy Rich to Albert and Freddie King. Zeppelin, Free, Hendrix, Sabbath, Little Feat, Skynyrd and Santana all the way up to Clutch, Kyuss and beyond.

Well, with a bit of luck, gigs will start up again very soon, here in Ireland. My hope is to get a few people together and go out and gig the EP and other tunes that I have been working on. Myself and Adam have started writing together, for a different project and I'm also working on some tunes with a very good friend in The UK.
I have started writing and demoing songs for my next release and I've already lost the run of myself, contemplating an album.

Mainly an overriding desire to create and to improve as a musician. I'll hear a sound or a tune in my head and I'll try to get to the guitar and get a rough sketch down as quickly as possible, because it will disappear as rapidly as it appeared and then develop it from there. Or, I'll have a drum pattern in my head and I'll put it down and then start adding guitars and bass, which was the case with a song that I'm demoing right now.

TSWS: How do you guys write your songs? Is it lyrics first or riffs? It's different for everyone.

I took my maiden solo flight on this EP. The lockdown made it impossible to hook up with other people, although I tried, when I moved back to Ireland in late 2020. This was an entire project of firsts for me. I'd never written on my own before, I had collaborated in bands and with Engines of Ruin, I had written a B side to a Single that we released. My musical input was always drums and percussion, so I really was stepping into unknown territory writing all the songs, playing all the instruments and writing lyrics and singing lead vocals. I wrote the music first and then the lyrics followed. Initially, I found that part tough,especially working in isolation, the uncertainty that creeps in. But, eventually I tapped into something and it just took off from there.

Bill Burr's podcasts are a mainstay, he keeps my insanity at bay. Today, I was mostly listening to Masters of Reality's  Welcome to the Western Lodge and Clutch's Vault Series.

TSWS: WIll you be focusing on any live performances anytime soon?

That is definitely top of my list. I'm chomping at the bit to get out and see how the songs work live. But, there is still a lot of uncertainty here, regarding live gigs. I'll also need to entice a few players on board.

I'd like to say a big thank you for all the support that I have received, across the board. I'm blown away with how well the EP and Single have been received and I'm looking forward to recording the next release. And thank you for giving me the opportunity to talk about the recording of the EP, I have really enjoyed it. I look forward to talking to you again.