An Interview With Michael Droske 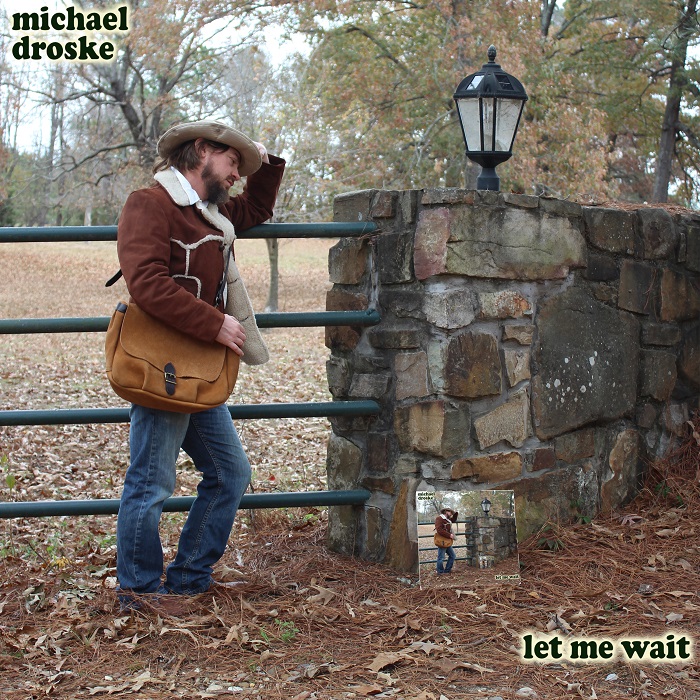 Michael Droske just dropped a full album release on us and it's got a ton of outstanding cinematic twang to it and a variety of sub-genre styles and approaches that range from post-punk to alternative pop and plenty inbetween.

The Let Me Wait record boasts a mass amount of dirty guitars, fuzztones, distanced winding, and a slightly brooding feel that stocks true throughout the record's course.

The release beckons artists like Nick Cave &The Bad Seeds and each track has an edgy catchiness to it that feels massive and at times warming.

This is one of those albums that have so much more than what's on the surface.

layers of bopping guitars drenched in distortion and reverb, vocals that are performed in octaves and a haunting undertone lurking just behind every corner.

Acoustic ballads with horns and color, dark and swirling bangers, and it all has so much life to it. The songs are breathing and living as they play.

They tell stories with details and descriptive lyrical styles.

Some tracks come off as just pure genuine classic rock still with that touch of edge and dripping echo and reverb.

There are many layers to this record and it's absolute fun to peel them back and let it ride.

One of the best things about this record is that there is almost always this pop feel always leaving its sheen on everything.

This was a refreshing release...is the understatement of the year.

TSWS: Let's kick things off with Let Me Wait. This album has a number of genres on it from indie-rock to classic rock and pop plus more! Where did this record come from?

Thanks for listening! Let Me Wait is what I think of as my first solo album. I released "Am I Shrinking?" with Daniel Dillard in 2020, but that album was all recorded from 2000-2001 and doesn't really represent where I am now, musically. The 9 songs on Let Me Wait were songs I'd written from 2010 to 2014 and recorded as demos, (3 with Daniel Dillard on drums) but I was focused on many different aspects of my life during those years and didn't feel ready to release them. Once COVID hit, I realized the opportunity to reach out to some really talented friends of mine, and with their help, I polished these old songs until they were transmogrified into brand new songs! But the genesis of this album came from me trying to process my feelings during that time through music.

TSWS: There are certainly some different styles on this album. Who can you say are your biggest musical influences?

Brian Eno once said that we're now "living in a stylistic tropics." We can pick and choose from so many different musical styles and make them our own in any combinations we choose. My biggest influences have always done that: The Beatles did music hall/vaudeville with "When I'm Sixty- Four," but they also pioneered psychedelic rock with "The Inner Light," and even dabbled in Indian music in "Within You Without You." The Beach Boys did the same: Pet Sounds was as much a classical record as it was a jazz or pop record. I like to say that Let Me Wait is a psychedelic rock record, I mean, "V'Ger's Dream" is definitely influenced by George Harrison, "For Those of You Who Measure Time" pretty much rips off the Beatles and Pink Floyd, "I Would've Written It All Down" is my attempt at something that feels like a Cream song, and "The Sun Keeps Coming Up in My Mind" owes everything to Hendrix, early Bowie, Led Zeppelin, and the Beatles' more symphonic stuff. But then you have songs like "They're All Here Today," which has more of a Nick Drake or Davendra Banhart feel, and "Not Gonna Wait Anymore," which is kind of a Tom Waits-esque jazz number. "Tuckered and Strained" was me trying to write something that sounds like it could come off of Eno's "Here Come the Warm Jets," and "Earthquake Warning" was trying to capture that indie rock/electronic sound of Beck, Blur, and Of Montreal. And the title track, "Let Me Wait," was directly inspired by Leonard Cohen and Ennio Morricone.

TSWS: When and how did this all start for you as an artist?

My dad bought me my first guitar, a Peavey Predator, back in 1993. I took a few years of lessons from Larry Campbell, a great jazz guitarist in Texarkana, TX. And it only took me a couple months before I was plugging a mic into a dual tape deck and layering my own multitrack recordings, just bouncing them from one deck to the other. I think I was 16 when I got my first Yamaha four-track recorder. I've got boxes of hundreds of tapes full of songs I recorded in my teenage years in the 90s, which I will probably never share with anyone.  Then in 2000, I moved to Austin, TX and formed a psychedelic rock band called Zarquon. We recorded an album and played a few shows until we all went our separate ways in 2005. But we're still great friends and those friendships have led to me meeting other friends who play on the album, like Stephen Saletta on "Tuckered and Strained" and Robert Madrid on "V'Ger's Dream." But ever since 1993, my life has had an undercurrent of songwriting and bedroom recording. I think once I joined Chaotic Noise Marching Corps in Seattle, I got much more comfortable identifying as a musician, as I was surrounded by extremely talented musicians who I learned to communicate with. I realized that the music I was always making for myself had value and was worth sharing with the world.  And it helped a lot that some of my friends and bandmates from Chaotic Noise and other bands in the Honk! music community, such as Harry Snyder, Rebecca Ray, Luis Benito, Adrienne Kerr, David Hrivnak, and LipServus Sunny all played on my recordings. I owe them a huge debt of gratitude, not only for playing on my album, but for helping me realize that recording music was a worthwhile and sacred vocation.

TSWS: What else really inspires or influences you to write?

Experiencing the ecstasy of hearing another artist's perfectly crafted melody, lyric, or beat is always the catalyst for my own songwriting.  I just saw a performance of "Swan Lake" by the Texarkana Symphony Orchestra, and my head was humming with energy for days afterwards.  That energy feeds an almost compulsive feeling for me, and I have to sit down and write lyrics or pick up my guitar and put together a chord progression. Usually what I write has nothing to do with what inspires it, although sometimes I tell myself, "I'm going to write a jazz song," or "I'm going to write a bassline that Carol Kaye could have written," or "I'm going to write my way through what I'm feeling emotionally right now," but I'm not going to write any ballets anytime soon. Who knows, maybe I will.

TSWS: Will we see any videos this year from you?

Yes. I'm currently working on another video for a song from "Let Me Wait," and I'm making a video of a song I'm still recording for my upcoming album called, "Look Out, I'm Open Now." Those should be out in the next few months.

Are you planning on any shows soon?I've been doing a few restaurant/bar gigs here in Texarkana, and I might do some more, but nothing's scheduled yet.

I'm loving the tracks that have come out from "The Smile," Thom Yorke, Jonny Greenwood, and Tom Skinner's trio. There's a new band called Cap'n Marble who do these really slick psychedelic pop songs which I love. Babe Rainbow, Ty Segall, King Gizzard & The Lizard Wizard, Fruit Bats, and Tiger Arcade are all making awesome psychedelic rock right now. And my saxophonist friend Khari Allen Lee has some beautiful and creative jazz albums I've been listening to over and over.

I'm a landscape architect and permaculture designer by trade, but right now 90% of my time and energy is going into natural building. My wife and I are building our own house in Texarkana, and I'm pretty sure it's going to be the largest owner-built straw bale/cob house in Texas, if not the whole U.S. Check out our YouTube channel, "Natural Living with Mike and Nalini," for updates on our build.
What's next for you as an artist?"Let Me Wait" was the songs I wrote from 2010-2014. My next album, "Alone in The Woods," will be songs which I recorded the first demos of from 2014-2019. The next single from that album, "Look Out, I'm Open Now," will be out next month. This album will, like my first album, be all over the map stylistically. I think I'm simultaneously getting more experimental and more traditional with the songs on this next one. But expect some genres that weren't represented on "Let Me Wait."

TSWS: This album feels like it was a great undertaking. What advice would you have for other up and coming artists out there?

Don't give up. Listen to those old demo recordings collecting dust on your old hard drives and try to add something new and unexpected to them. Get your friends to add their weird and unique voices to your music. Don't hide anything, but share rabidly and rapidly, and your excitement will become contagious. I was surprised and gratified to find so many friends who wanted to contribute their musical gifts to my songs. So reach out to your friends, even when you feel like you don't have a fraction of the talent they do. You might learn that they're as impressed by your music as you are by theirs. And it's even better when they co-create with you something much better than the sum of its parts.

I want to let you know how infinitely grateful I am that you have taken the time to listen to my music. I write the music that I want to hear, so it's good to hear that others share my tastes! Please stick with me and listen to my new stuff as it comes out. I know it's a trickle right now, but there is a huge backlog that's about to burst out, so please be patient.  Just let me put a few more posts up on my house first!