An Interview With Ran Aground 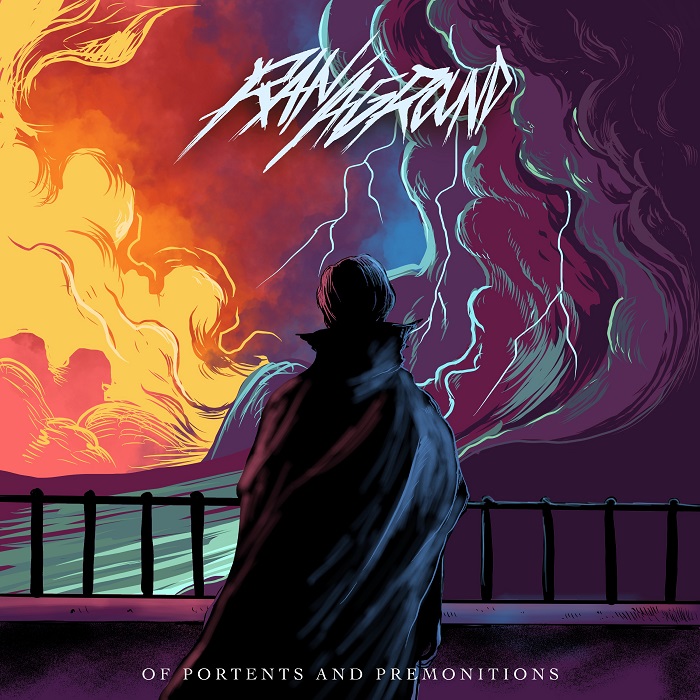 A new album release from Ran Aground brings on quite a reflective and honest approach on the forefront and it comes with endlessly addictive progressions and hooks that accompany a songwriting style that blends old school and a fresh approach as well.

The Of Portents and Premonitions album is booming with walking bass lines, a catchy but progressive pop rock feel and the songs all have a way of painting these pictures in your head and do so with a vivid set of textures and soundscapes.

The songs are powerful and really do have this amazing way of storytelling that lets you sort of get washed away with each song.

Upon listening to the entire album you do get the feeling that this is actually a concept record and the songs, like chapters of a book, link together to portray the whole story in the end.

A lot of the record plays out very theatrically like scenes in a play and it makes things even more exciting and engulfing as you get pulled into the scenes and words that are happening around you and you end up swimming in the storyline.

The band has a great almost live performance feel and it's due to the players and instruments seemingly feeding off of each other's energies which makes things feel alive and breathing.

This was a super cool album that tells tales and opens your eyes and ears quickly as you fall right into the songs one after the other.

It is quite adventurous and at times even has this sort of pirate rock aspect to it.

This was really fun and it's great to let this album take you on these journeys with them.

Guitars rock out with a lively distortion and gusto, drums crush and songs have plenty of surprises.

TSWS: Let's kick things off with the Of Portents and Premonitions album. This record has an alluring cinematic alternative rock feel to it. Where did this albumcome from?

Of Portents and Premonitions was over a year in the making. Songwriting began back in mid-spring 2021 and took about a month, tracking followed that summer, and continued recording lasted up until mixing and mastering took place this past spring. Total time in the studio was about 20 days spread out over 2021-2022 and I got the masters back in September. The engineer/producer I've worked with on the last 3 recording projects is going to retire and shut down his studio at the end of this year, so this album is something of a conclusion to the current chapter of Ran Aground. Going forwards, the recording process will likely be very different.

The songs themselves mostly came from a place of substantial personal darkness. 2021 was a challenging year for me, I went through some of the most troubling periods of my life. I channeled a lot of my experiences into the album- themes of heartache, loss, despair, failure, love, and fleeting hope. I really wanted to create a soundscape that facilitated my emotional expression, musically and lyrically. I'm happy to say that the record is an accurate representation of what I wanted to record, flaws and all.

Portents and Premonitions are two similar words that describe something waiting in the future. Both words may pertain to a future in generally negative terms, but one is more about observation-based conclusions and the other about feelings. Duality is a very big concept in my life, so I chose to structure this album based on the duality of the darkness I felt gathering on the horizon and my perception of where things are all heading. My vision of the future is not positive, it's rather tempestuous. The songs reflect that. Some songs are about darkness looming, others are about fighting for glimpses of light.

TSWS: When did this all start for you guys?

Ran Aground, as a band, began about 7... 8? years ago. I've lost track. We started as a reggae and punk band playing a mix of covers and originals. Lots of lineup changes between then and now. Ran Aground was solely a live band for most of the beginning years, things are quite the opposite now.I did all the instruments and vocal tracking on this release (two female guest vocalists also performed), and I would never have guessed that I would be recording let alone writing all the parts for songs. Honestly, I don't want to be. It's not a role I set out to be in, I just chose to stubbornly persevere when the band lost steam collectively, and here we are 2 LPs later.

Life, what I encounter, and my mental health. I like to put my emotions or experiences into songs, although I generally do it metaphorically or allegorically. Ran Aground's nautical theme allows for metaphors and imagery that create a landscape with the musical parts. I've never considered my music storytelling. I look at the songs I write as messages or thematic expressions, ways to emote and express an experience or idea. Music and songwriting have been a form of therapy for me for as long as I can remember. When I'm focused on a music project and something has emotional weight in my mind, I tend to put it to music or words. The songs I've written are very much a part of me and reflect aspects of my life when I wrote them. They build on themselves from there. I've always enjoyed writing. The music I write is an extension of how I feel and see my lot in life, it's the most viable and relatable method of expression I've found.

TSWS: This record has some great styles! Can you give us some of your top musical influences?

My major influences are metal, punk, classic rock, and classical. Everything from Dark Tranquillity to Michael Schenker to Arcangelo Corelli. These are the genres I grew up with and what I learned instruments along to. Cigarettes After Sex was a large influence on my songwriting at the beginning of this record, although I'd say you'd be hard-pressed to find it in the record's final form. The nautical influence comes from film scores as much as it does bands with nautical music like The Decemberists and The Dreadnoughts. Classical, particularly darker baroque compositions, are a major influence on my writing as well. I'm still hoping to find a way to make a guitar-harpsichord sound through my pedal board, please let me know if you do! Film scores were actually also a big part of my musical inspiration for the album, fitting that you described it as cinematic. I covered a song from Mary Poppins and had several songs develop directly from the emotional impact particular film scenes had on me.

I'm currently in school for my doctorate in business administration and I run a small business from home. If I'm not working or writing school papers, I'm probably out at the beach, looking for new places to go, or buying new music. I have way too many albums. It's actually a storage issue at this point.

TSWS: Who's in all your headphones right now?

Oh, well... L.S. Dunes and The Sounds of Animals Fighting both have relatively new releases that I've been replaying. I'm a big Anthony Green fan, and those two have been a significant part of my recent musical rotation. Lots of baroque classical during work hours, 90's death metal, 70's hard rock... I've actually really been enjoying going back through and listening to the Deep Purple MkII and MkIII albums again, that band will always be a favorite of mine. Steely Dan. Bolt Thrower. Madrugada.

TSWS: Are you guys doing any live performances right now?

No, the primary focus right now is the recent album release. The band has been me and myself as of late, so a full-band live performance would require some changes and getting cohesive musically as a group. I would really like to get back on stage with the new songs. Ran Aground hasn't played live since 2019, I'd like to change that.

TSWS: This record feels like a big undertaking, is there any advice you'd give to other up and coming bands out there?

I would be the first to tell you that I'm not a person to ask for advice. That being said...Try not to lose focus on what's important to you in your music project and don't give up if/when things get tough. Recording an album is definitely an undertaking, plan ahead and if you really set yourself to it, recording is really only another stepping stone in the progression of your band. I was in a band once that broke up in the middle of our album recording sessions at a studio... comparing how that felt to the feeling of finishing an album despite significant setbacks, I'd definitely say finish the album if you have the songs ready and the resources to do it. Maybe just don't take a year to do it, like I did?

More music. I have a slew of new ideas, it's really just a matter of sitting down and fleshing them out. And making the time and resources to get back in the studio, of course. The bass player who started the band with me is a good friend, ideally we'll sit down and write the next album's songs. Definitely look for a new single or an EP before the summer of 2023.

Thank you. More than anything. Thank you. Thank you for listening and supporting what I do musically. Whether you listen to a song or buy an entire album, being able to connect with people through art has been and continues to be a lifelong dream of mine. Having music resonate with a listener in some way is the highest compliment I can think of and have ever received.