An Interview with Ronley Teper & The Lipliners 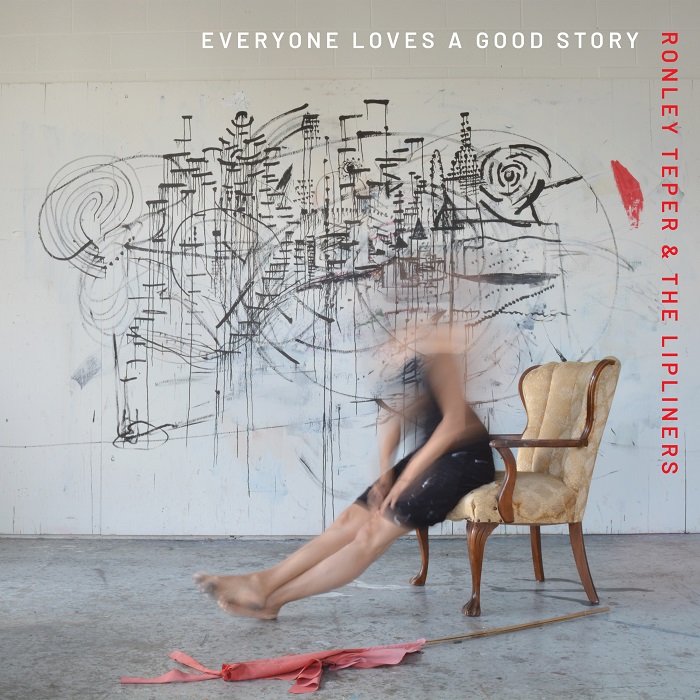 A new release from Ronely Teper & The Lipliners delves into a contemporary and deepening single complete with a massive orchestral backbone and tons of layered textures and tones that all melt together to create an atmosphere that swims around you.

"Everyone Loves A Good Story" is a vast single that takes you quite the musical journey from start to finish.

The song plays out with a heavy theatrical feel and is performed with passion and heart along with its tasteful allure and vivid imagery it creates in your head.

Gorgeous sounds paint pictures and atop all of the lush music is the vocal that tells a story and gives you something to hold onto.

The single has a bountiful and rustic aspect to it that also adds to its cinematic undertone and storytelling attributes.

A whirlwind of instrumentation builds into something vast and the soundscape of it all becomes something you easily get washed away with.

Along with this wonderfully woven opus comes a music video that really pulls you in even further into the song's atmosphere.

The video for "Everyone Loves A Good Story" is animated and boasts plenty of outstanding tricks of the eye that have a haunting undertone at times but really depicts a sort of adventure which somehow goes right along with the song's horn and string sections.

The music video is just as beautiful as the song itself and showcases such rich animation and landscapes that if helps really whisk you away to another place as well.

With such a great release, we wanted to have a talk with Teper to find out where this all came from and what might be up next.

TSWS: Okay so let's start with "Everyone Loves A Good Story". This track has a massive soundscape and cinematic feel to it. Where did this come from?

Hi! Well let’s start with storytelling. “Everyone Loves A Good Story” is about the process of writing, creating, storytelling, cinema and the creative road blocks that often happen. Some call it writers block and the journey to find the POV again. It begins very softly and builds it’s narrative. Like many pieces of literature we begin with a protaganist and or describe the setting, bringing in content and antagonists, building and building anticipation, ups and downs, rounds and rounds, climax and denouement. Is this bringing anyone back to English class? As the story begins to unfold so does the unraveling of a massive soundscape. All my works I feel are a bit theatric and I always envision a cinematic feel. I have an enormous group of collaborators I call The Lipliners, ranging in instruments and mediums and with these magical people and elements a massive soundscape inevitably occurs.

TSWS: The single gets quite orchestral. Was this always the plan?

Yes, The Lipliners play a number of orchestral instruments, and I go wild for epic orchestral jams. Like any good story I knew that as I developed the roots of this song that the band and producer Jaron Freeman-Fox would take it there.

TSWS: The music video for this track is awesome! Tell us about how you found an animator or how this came to fruition.

Thank you! Yes, director and 3d animator Saúl Lederman did an awesome job! I think he nailed the moods, animation and context of the song completely in this video. Saúl is my dearest person. He has been a visual contributor to The Lipliners for over 6 years. He’s a cinematographer, does live performance projections, is a designer, videographer, photographer, and over the last few years; as he discovered a love for creating animations inevitably became the videos director and animator. He had seen me working on it for a long while and understands my process. He took it one more step by making it a visual/audio animated experience.

That’s a big question. Do you mean writing music in general? The song itself? The full LP? I’m going to go with the full LP. I hadn’t made a full studio LP in many years, opting to put out live recordings, as the Lipliners are really a special live performance experience, never playing the same way twice, and feeding off improvisation and audience participation. I had wanted to somehow fuse the live feel with a studio record again and knew I couldn’t at the time financially afford to go there. With a stroke of luck after a few grant applications I received enough funding from the Ontario Arts Council to get the project started. Thank you Ontario Arts Council!

TSWS: I'm hearing some different styles blended in this album. Who are some of your biggest musical influences?

I have a love for almost every genre of music. At least certain songs in each genre :). Depending on my mood I will gravitate to certain styles and who I imagine playing on the song. I have so many musical influences it’s challenging to answer this, but I guess for shiza’s and giggles I’ll say, Tom Waits, Kate Bush, Peter Gabriel, The Grateful Dead, Laurie Anderson, Mary Margaret O’Hara, Talking Heads and Aretha Franklin.

I am currently in the beginning phases of writing a full animated rock opera.  I am also revisiting works I started at different times throughout the last two decades that I never finished, forgot about, and then dug up and found interesting that they still resonated with me.

Making music videos for other artists, video editing for both other artists and my own projects. AND, endless grant applications, and other administrative independent artist responsibilities.

TSWS: How do you write songs? Is it lyrics first or music? How does it work for you?

Not much structure for me on this, Sometimes it’s music first, sometimes lyrics. Sometimes a melody just comes; and sometimes it starts with a rhythm. Oftentimes it starts off with just a random jam with The Lipliners in a live show and I revisit these ideas later. As of late however,  pandemic life and not much live performing this process sadly hasn’t been as prominent. Hopefully soon again.

TSWS: Will you be putting any focus on live performances anytime soon?

I got a couple of small duo or trio gigs locally in the next couple weeks, but i’m taking it slow coming back to the indoor live performance thing with a large ensemble. I miss it very very much, A piece of me is missing. Performing live is my favourite thing to do, but I’m still a bit resistant to book a full tour, i’m still feeling pandemic uncertainty and safety. Hopefully a full tour in Canada in the early Spring, then back to Europe in summer 2022 for an extensive tour.

TSWS: What inspires you to write really?

TSWS: This song feels like a pretty big undertaking. Is there any advice you'd have for other artists out there?

Maybe I'm dramatic, but living life in general is a big undertaking. From one artist to another, remember that we are blessed to have creativity as a medium of expression and to cherish the process when it inspires you.

TSWS: Before we go, what would you like to say to any fans of the music?

Thank you! Thank you for listening and feeling a connection to something in these creative works that resonates with you. I am grateful for the connection.