An Interview With Thistle Sifter 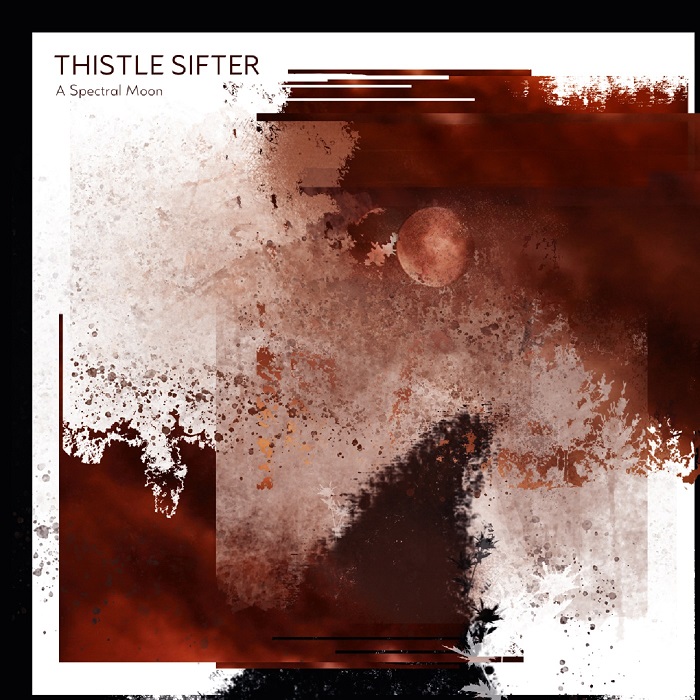 It's time to dive into an immersive and transformational full length release from Thistle Sifter.

The album is dubbed A Spectral Moon and it takes you through musical chapters and surrounds you with intricately performed sonic skins tones that each give particular characteristics of mood and emotion, action, or mystery.

The record is swimming in melody performed with guitars and synths and throughout this ethereal and almost spiritual feeling journey, you get rock undertones and psychedelic experimentalist soirees that end up taking you with them.

Sounds fade, swell, and strike in this evolving and ever changing instrumental piece of work.

Songs connect and break, they intertwine and yet journey's end and begin.

Throughout it all there is a pull. Like an unseen force that drives you to feel things when you hear the music.

This same force is what drives you to want more of it.

Lucky for us all, this is a good extensive album that you can embed yourself in.

This is something that you haven't heard quite before. It's not new by any means. But it's different. The approach. The styles, the way it all works.

It's a very beautiful record and with its release, we wanted to have a sit down with Thistle Sifter to find out where it all really came from and what may be next for them.

TSWS: Okay so let's start with the A Spectral Moon album. The album has such a cinematic and progressively driving ambience to it! Where did this record come from?

The album A Spectral Moon came about following a serious cycling accident I had in November 2020. I found myself at home with quite a lot of time on my hands and decided to try and translate some of these emotions into music, as a sort of trauma therapy. This creative process really helped me come to terms with the physical and emotional state I was in at the time. It was never my intention to let anyone hear these compositions and it was only when I let a couple of friends listen to the first track, Tarantula, that they encouraged me to finish the demos I had. Thistle Sifter is the result.

I'm always inspired by musicians who aren't afraid to try new things and push their musical boundaries. Radiohead remain probably my biggest influence. Portishead had a massive impact on me and my musical development, particularly their album Third. My guitar style was also heavily influenced by post-hardcore bands like Million Dead & Thursday and post-rock bands like Mogwai, Explosions In The Sky and This Will Destroy You. In recent years I've been influenced by predominantly ambient and instrumental music, such as Nils Frahm, Christian Gabel and Brian Eno.

Listening to and playing music was a big part of my upbringing and my father is also an avid guitarist. From an early age music has always been a creative outlet for expressing my emotions and has led to so many amazing experiences through touring and making music with some very talented people.

The songs for A Spectral Moon were all written and inspired by the aforementioned cycling accident and I have often been at my most productive when faced with a problem or unhappy. Music has always allowed me to express these emotions in a positive way.

I'm still recovering from the accident, so rest is still essential at this point. Creating music at home is a natural part of this process and helps me to unwind. I have a young daughter and she keeps me out of trouble most of the time too. We're lucky enough to live in the woods and we try to spend as much time as possible outdoors.

I've been listening to the Dutch neoclassical artist Joram Feitsma recently, who has just released a new record entitled Ether.

What's next for you as a band and are you putting any thought into live performances?

Thistle Sifter was always intended to be a low-key one off solo record. I had no aspirations to promote it or perform live. During the recording process I was lucky enough to work with some great musicians who helped improve the demos I had recorded. During this period we talked a lot about trying to replicate the songs in a live setting with visuals and we hope to be able to do this at some point in the near future.

I've always played in bands with musicians who were far more technical than myself and never had to delve into the home recording side of things. The pandemic changed all of this. It wasn't possible to practice with other musicians for large periods and I started to experiment more from home, sending music digitally back and forth to others. This led to my home studio expanding and is where I recorded all the demos for A Spectral Moon. In the past I was used to writing in a room together with others. I do miss this a lot but COVID has allowed me to develop my own recording skills, so that I can write and record from home in the future.

Trust the creative process and don't be afraid to try new things to keep pushing yourself to improve.

Thanks for taking the time to listen to the album and for making it to the end of this article!