An Inteview With Tuesday Atlas 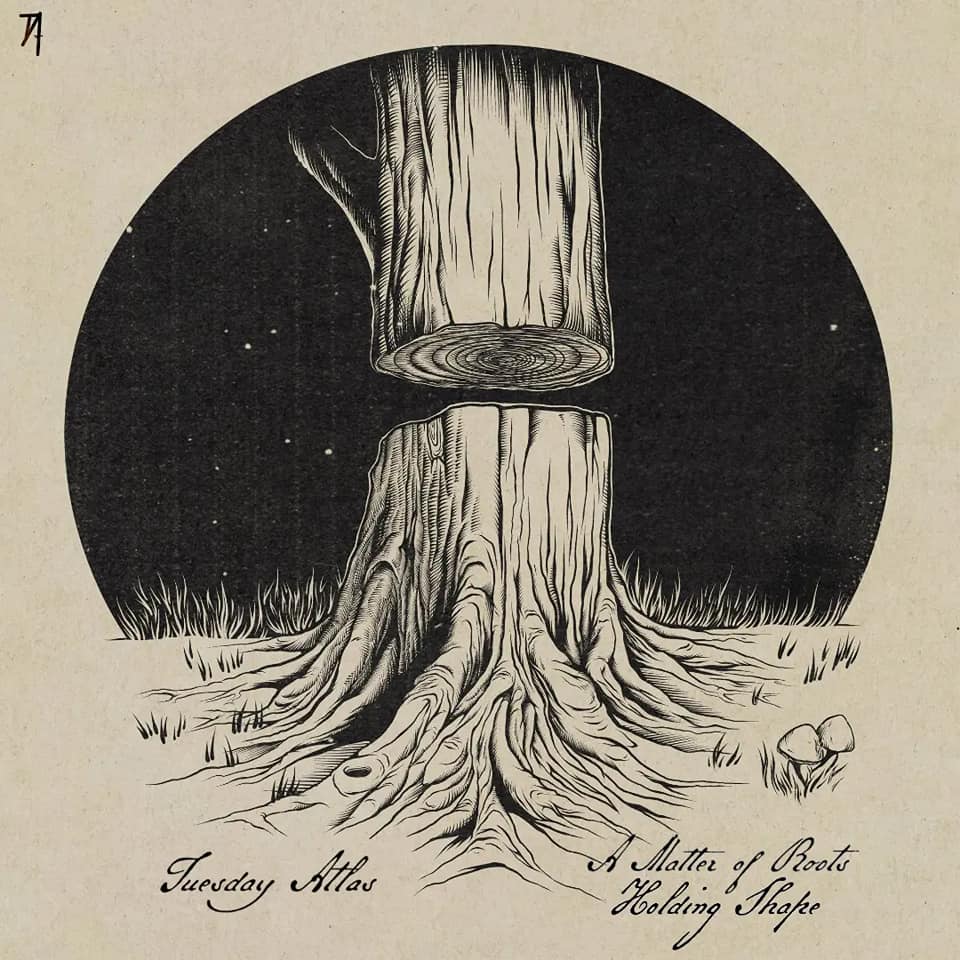 A fresh, double single release from Tuesday Atlas has a cinematic and smooth indie-pop rock feel that borders on that contemporary undertone with soft vocals and lush harmonies, guitar lines that serve as hooks, and a full bodied but still kushy feeling all around.

The A Matter of Roots //Holding Shape double single release features some arming and slightly edgy soundscapes that really do boast some great guitar work as the riffs aren't the normal, you'd expect.

The songs touch of folk and can even have this rustic undertone even though its being paired with a progressive rock sound lurking just beneath the surface.

You get such a massive record just within these to singles that it's absolutely awesome.

You do get that late 90's underground alternative band feel but later on when they release something in the 2000's and it's softer.

This was melodically driven and emotionally bound as the tracks really flow and feel like they come from real and genuine places or experiences.

You get some rich hooks in there even ones you never expect that just creep up on you.

The guitars really are just graceful, and the vocals are passionately performed.

The whole thing has a powerful approach and can actually be empowering. It grabs your attention, and the music starts to engulf you the way it was meant to.

It takes you to another place.

This makes me think of bands like Far or Pavement.

With such a killer release, we wanted to touch base with the band to talk shop.

TSWS: Okay so let's start with "  Holding Shape". This single has a classic underground alternative rock feel to it. Where did this track come from?

Dakota writes the majority of our music on his acoustic guitar, and everything starts out as sort of a singer/songwriter type of vibe. "Holding Shape" was one of these songs, and was initially meant to be a standalone acoustic track. However, our writing process typically tends to cause songs to evolve as we each add our own parts over time. I think "Holding Shape" is particularly special for us, as well, because it begins with those singer/songwriter hints, and very naturally builds into a really solid, driving rock track with the feel of our older, more melancholic tracks from "Hell Has A Sound." It really feels like a bridge between that EP and our newest album, "The Stone Tape."

2. It can be hard to pinpoint a definite style that our music has because we each have very distinct and different musical influences. For Dakota, he grew up listening to Nirvana and then transitioned into emulating bands like Manchester Orchestra and City and Colour. For Sisco, he's very influenced by the Red Hot Chili Peppers, Tom Waits, and Type-O-Negative. For Easton, it's Every Time I Die, Fiddlehead, and Pearl Jam. For me (Skyler), it's Balance and Composure, Buckethead, Animals as Leaders and lots of other metal bands. Obviously, the wide range of influences causes us to have a bunch of different sounds that manifest in our music on a track by track basis, so again, it can be difficult to answer the question, "Who do you guys sound like?"

TSWS: This release also has a second single correct?

3. "Holding Shape" was the second song on our double single release, "A Matter of Roots // Holding Shape." We decided to try out a new release strategy for our album "The Stone Tape" by releasing almost every song from the album as a standalone or double single. We are very proud of all of the songs, and really wanted people to be able to hear every track with time to process them in between, rather than just throwing out 11 songs and hoping for the best. We felt that "A Matter of Roots" and "Holding Shape" paired well together as kind of the black sheep of this album. Where most of the tracks are driving and aggressive, these two really pull it back and focus on the more melancholic aspects of our sound.

4. We have all been playing our respective instruments for about 15 years, as all of us began playing in our early teenage years or even before. At the start, at least for me, it was really about how I wanted to emulate the artists I loved, and my dream to be on stage one day playing guitar solos. Sisco and Dakota have known each other since they were about 11 years old or so, and basically grew up together making and learning how to play music. The bond between those two from a musical perspective was already extremely strong when I met them in our freshman year of high school at age 14, and we kept up that friendship throughout our college years. By the time we met Easton in 2019, our collective dream had become to simply make music that relates experiences and emotion, and really connect with people that way. As we kept that in mind, I think we realized that's what caused us to fall in love with music in the first place as children.

5. With our release of "The Stone Tape," the plan is to get right back into the studio as soon as possible to record our follow up. We already have the songs mostly written, thanks to an extended break forced on us by COVID, and our next batch of songs is so exciting and different that it's been difficult for us to really focus on the current release!

6. I would say our biggest songwriting inspirations come from things that happen to us - not just the circumstances themselves, but our emotional reactions to those things. Emotions are powerful and not always rational, and trying to unravel and untangle those complicated reactions and feelings can lead to some very confusing or enlightening places. It's in those places that we like to find the inspiration for our songs.

7. Outside of music, we all have very different hobbies. Sisco and Dakota both enjoy working on their house and cooking delicious meals. Easton is a phenomenal artist and enjoys drawing and learning about the multitudes of cryptids that have been "discovered." As for me, I really enjoy playing Dungeons and Dragons or video games, and spending time with my family.

8. I know Sisco and Dakota have been very into Nick Cave lately after seeing him in concert, as well as bands like Basement. I've been very much getting back into Gojira and Animals as Leaders recently, and honestly I couldn't even tell you what Easton's been listening to! He's very much into the Astonishing Legends podcast as well as Last Podcast on the Left, so I wouldn't be surprised if that takes up all of his listening time!

9. We've had a pretty full summer of shows this year so far, including Middle Waves Music Festival in June, which has been amazing. We have a July 30th date in Dayton, OH, as well as an August 24th date back home in Fort Wayne. Other than that, we have some things up in the air for later in the fall, but we're mostly going to be focusing on recording our next release!

TSWS: This release seems like a big undertaking. What kind of advice might you have for other up and coming bandout there?

10. The biggest piece of advice I have for any up and comers is COMMUNICATION. Discuss EVERYTHING with your bandmates - your individual goals for your music, your goals as far as timelines for receiving artwork, your release schedule, your advertising and promotion plans, your expectations with regard to each other, your managing of expectations for the release - all of it. Not only does it help you all avoid some uncomfortable discussions, it can also make you guys a lot closer and more of a cohesive unit. You've got to align with each other for success, and great things can happen just from that!

To anyone that enjoys the music - THANK YOU so much for giving us a shot. More than anything, we just want to make music that speaks to people. We believe in each other and in the music we make, and we believe that within each of our releases there is something for everyone. If we can make one person's life better for having heard one of our tracks, we can truly say that this little project of ours was a success!