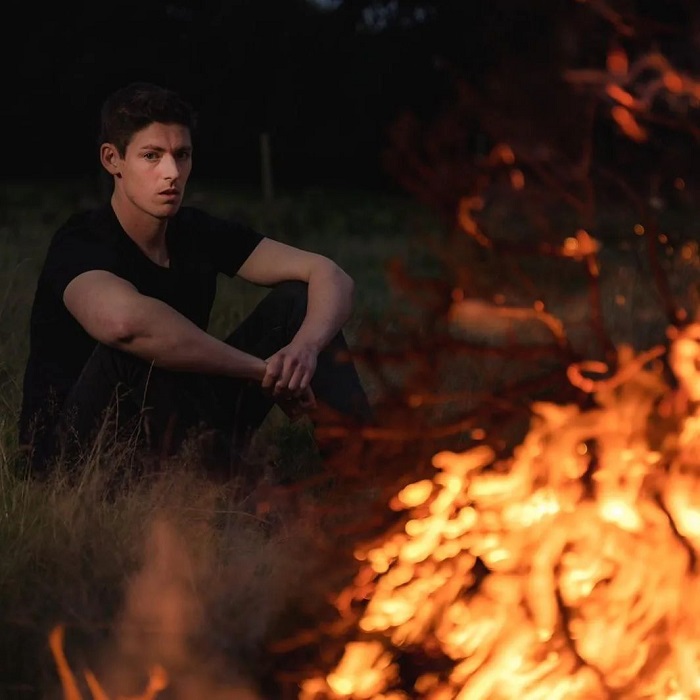 Alex Spinney returns with a new single that brings several pop styles together in an almost ethereal undertone and a roots feel and performed in true Spinney style with tons of passion making it all super addictive and endulgent.

"Boodiyayay" is absolutely powerful and you really don't expect

it at first but damn it creeps right up on you and takes you to a deepening place that feels real and even cinematic.

Backing vocals chant its chorus and the harmonies are haunting as violins stream throughout the song's bountiful soundscape.

There is something infectious about this track that crawls under your skin and makes residency there for the remainder of the day.

It's not invasive but it's certainly something that gets you thinking and begins to bleed it's emotional outreach into your thought process and it's really outstanding.

It is totally best to just let it all engulf you and wash you away with its tones and fullness.

It's certainly powerful enough to really keep with you.

What's also quite impressive is the music video that accompanies the single as it really showcases even more of Spinney's presence and character as an artist in general.

You see him perform at the piano and really dig into the track and it's all out in the woods which is a nice touch as well.

The whole thing is a great example of the standard of artist Spinney actually is and it's wonderful and tastefully done.

With the release of this killer track, we wanted to have a talk with Alex Spinney and talk shop a bit.

TSWS: Okay so let's start things off with "Boodiyayay". This track has an almost root soul
pop style to it. Where did this track come from?

Well, it all started from a simple 10 second recording I made on my phone of the
main 'Boodiyayay' riff, whilst walking around London. It was about 5 years ago, and I
just thought that maybe one day I might use it, although I don't think I thought that
was very likely. Then 3 years later, I dug out my old voicenotes, and thought, actually
let's try and make a track about this!

From that riff, I began to create this bluesy, folky sound that is quite hypnotic and
otherworldly, whilst hopefully still staying true to my own pop style. Then for me, it
felt natural to pair it with this cathartic and revenge-filled narrative of dealing with
the brutal end of a pretty rocky relationship.

TSWS: I'm certainly hearing some different styles mixed in on this one. Who are some of
your biggest musical influences?

Currently, I'm listening to a lot of pop music, and I love Griff, who won the Brit Award
for Rising Star last year. I think she makes pop music that is so engaging, really
current and yet still so emotive. I'm also loving HAIM, Lil Nas X, Holly Humberstone,
Miley Cyrus, Lauv, James Arthur and Sam Fender, and then even more folk and
country artists like Alison Krauss and Kacey Musgraves.

Growing up, I think piano-based artists such as Elton John, Sara Bareilles and John
Legend influenced me, as well as pop artists that kind of owned their theatricality,
such as Sia, Pink and Lady Gaga. Also, I really admire artists who vocally own their
own style, and for me that's people like Sam Smith, Tori Kelly and Alison Krauss.

Yes, although at the moment the priority is finishing this EP. I'm really excited to be
able to get out there and perform my own songs to a crowd - I was able to do a bit
last year, but some gigs got cancelled because of Covid. So I think I'll start properly
filling out the diary later on in the year.

Well, my own experiences inspire me to write, and I'd say my songs are pretty
personal, although I'd like to think that they can be vague enough for other people
to be able to attach their own meaning to them. Music will always be one of my

strongest forms of self-expression, and I find it pretty tricky to write a song if I don't
have a connection to the material, so my own life experiences definitely inspire me
to write.

Other music inspires me to write! Especially if I'm jealous of a song that I hear and
wish I had written it - I'm like, let me have a go! Also, I love film and TV, and they
often inspire me to write, either in terms of the plot or just the cinematography.

TSWS: The music video came out pretty amazing! Was the premise and shots your ideas?

Ah thanks, I appreciate it! Well, I originally wanted a photoshoot done for the
artwork, and I knew that I wanted it to feature some sort of fire, and be very much
rooted in the natural world, but that was pretty hard to find in London! A friend
from North Wales suggested locations up there, and put me in touch with Lindsay
Walker, who recently just won a BAFTA for her latest documentary feature.

Lindsay then said that she loved the song, and was actually interested in directing a
full on video for the song (and had a concept based on the artwork shoot), which I
had originally thought would be a bit ambitious. However, she and Enlli, her
producer, were so impressive, quickly finding a piano (that we could burn) and
sourcing amazing locations, and also being so supportive of the idea, that I was fully
sold!

We knew we wanted a video where it would have a loose narrative that essentially
culminated in a huge bonfire scene, and that the general themes of finding closure
and catharsis would be in the mix as well. So we bounced ideas off each other as a
four, and then Lindsay came up with a structure that we could then work with. Then
of course Lindsay did her magic on the day, getting loads of different material to
work with, and then did even more magic with the edit to create what we have now!

TSWS: What's next for you as an artist? Is there anything new in the works even now?

Well, we're currently finishing off my 3rd track, which I'm really excited about. It's got
more of an electronic vibe, but still keeping that emotive pop sound that I love. Then
I'm thinking of collaborating with a director friend on a music video for it, which
should be pretty exciting. I've also got 2 more singles on this EP before probably
taking a little break and working out my next move.

TSWS: Do you collaborate to produce your songs? What are you performing aside from
piano and vocals?

So I work with a great producer, Adam Connor, who runs Iguana Studios in Brixton. I
go to him with my demos (piano and vocals), which are usually pretty much done in
terms of music and lyrics, and then with Adam at the helm, we kind of create the
soundworld together! I perform all the BV's, which I really enjoy doing, and then any
organ/synth piano work, as well as the odd bit of percussion here and there! Then
we get in session musicians for bass, guitar and drums, if the track needs it.

Very good, and tricky, question. Posting about music? Haha, well, in my other job I
actually teach maths, which I genuinely find really enjoyable, as it's pretty different
to the whole music thing. Then in my spare time, I play tennis, go to the gym and
generally watch quite a lot of films/TV - highbrow and lowbrow, probably more of
the latter.

(I'm aware that was a very standard answer)

TSWS: This track feels like a big undertaking. What kind of advice would you have for other
up and coming artists out there?

Well, I don't know if I'm in a position to be giving out advice in any way, but for me,
I've enjoyed sticking to my guns with this track. I knew what I wanted it to sound like
and even look like, and I think having that vision for a track does help it get off the
ground quicker.

Thank you?! Get in touch, follow me/DM me, I'd love to hear from them. To be
honest, it still means so much to me if people connect with my music, and I'm just
excited to share more. I've got 3 more songs from this EP coming out, and they are
definitely a bit different to my first two tracks.