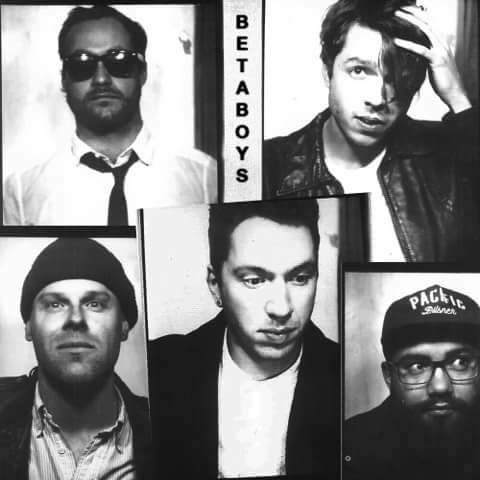 The new EP release from Betaboys is finally here and it's everything any 80's or 90's kid would want from an indie rock / pop record.

This release has all kinds of colorful fusions between vocal harmonies, guitars and synths floating around the songs as they lay out heavy handed melodies and anthemic chorus lines.

These songs have that genuine and familiar feeling that gets you all warm and fuzzy and hits the nostalgic bones in your body just right .

Surfed out guitar sounds and vibrant pop songwriting along with reverb soaked vocals and tons of key and synth hooks keep this record going and it all works like a charm.

It is indeed a charming record and it's come at the perfect time for Summer.

Think The Strokes meet The Cure and you'll have it.

These guys have such a fun and airy aesthetic it's addictive.

The EP is called So Shy and it's got the feeling of being a teenager and meeting the girl you have a crush on at the roller skating rink.

It's exciting and alive with youth.

We're no strangers to Betaboys and we've been waiting for this release for quite some time.

It's completely worth the wait.

With such a killer EP dropped, we wanted to have a sit down with the boys to find out how this all happened.

TSWS: Okay let's start with the So Shy EP. This record has a killer alt-pop tone to it and comes with

loads of swagger and edge. Where did this EP come from?

A lot of it comes from nostalgia for the 1980’s. This band is a bit of a love letter the to music,

film, sports and pop culture from that time.

We’ve been playing all of these songs for about 3-4 years now, and they felt the most fully-

formed to round out an EP. We brough the songs to Chris Dadge, he’s been in so many great

projects locally and has worked with some of our favorite bands, like Alvvays. He was amazing

to work with and we had a lot of fun bringing these songs to life. We completed mixing and

mastering in June 2020. With the pandemic, we wanted to wait and see what would happen,

and after a few months, we decided we wanted to get the EP out there!

TSWS: I'm hearing a load of pop styles on the record. Who are your biggest musical influences?

The Cars, The Go Go’s, A Flock of Seagulls and The Psychedelic Furs are all such amazing

bands that we look to. If I had to pick one, The Cars have probably been the most essential to

this project. In terms of stuff released more recently, we all love Alvvays, Clario, and

Calgary has such a great music scene, we’ve all played in multiple bands (some still do

currently) and through that I just reached out to some of my favorite folks. For these songs, I

would write parts of the songs using my bass, a drum machine and a crappy thrift store

keyboard, and record them on my phone. A few of the original demos, “Wait It Out” and “Who I’d

Dance For”, are on this EP. I turned to my good friend Eric Svilpis to further work on some

demos, he definitely helped me discover what I was going for and wrote some parts of these

Once we had a clearer idea of what we wanted to band to sound like, I started reaching out to

specific people I thought would be a good fit. It was really nerve-wracking for me to reach out to

the guys, as I really admired their work in other bands. It’s scary to share your personal vision

with people you respect so much. Will they like it? Will they think it’s terrible? I’m grateful it

worked out. Brett (vocals) and Tom (guitar) were the first to join. “Wait It Out” was the very first

betaboys song, and I remember being so excited when Brett sent me his vocals over top of my

demo. It was exactly what I envisioned. We then rotated lineups for about a year before finding

first show. Since then, we’ve just focused on playing shows and writing a lot of new material.

when the pandemic ends.

TSWS: Now that the EP is released, what's next for you as a band?

We’ve been able to write pretty consistently during the pandemic, all remotely, just adding parts

to songs between all of us as a team. None of us have done anything really like this before, and

it’s been so cool to see how things are evolving with the new material! I’ve written probably 20

songs in the last year, and we’re always trying to pare everything down to the best few songs.

We’ve currently got a collection that I’m excited about, so I’m thinking a lot about the next

album. When it’s safe to do so, we’ll get back together and continue evolving the songs for the

We’re definitely excited for a the return of shows when it’s safe and responsible to do so. We

haven’t worried much about trying to do internet concerts or anything like that, we’ve just been

perfectly happy to focus on writing new songs, promote the current EP and leave it at that. I’m

received in a live setting.

We all keep busy with various jobs. For example, I am an elementary school teacher and

Flames. Pre-pandemic, we liked going to shows and supporting the many fantastic bands and

artists in the city. There’s so much cool stuff happening in Calgary, especially in the arts

community. We like to get out and enjoy it as much as possible. It’s been a huge missing for all

of us during the pandemic.

I just discovered a band called “Book of Love”, who were one of the first electronic acts of the

TSWS: The EP feels like a big undertaking. Any advice you'd give to other up and coming bands out

For me, it’s always about writing the best possible song. Sometimes that means giving up a part

that you play, or a section that you like. The goal is to serve the song, and sometimes your

favorite parts, if they get cut, can often come to life somewhere else down the road. It’s a fine

line between reworking your songs and being satisfied with them, but it is good to be critical of

your writing. Be open to asking other writers you respect to give you feedback on your songs.

That has been a huge help to me over the years. The biggest part though is to enjoy the ride,

and surround yourself with folks that inspire you and you love being around.

Music is the obvious inspiration, but it definitely doesn’t end there. If I really want to get in the

mood to write, I might watch clips of certain old movies, sports games or even television

commercials. There’s also certain spots in Calgary that I like to go to and write, or even just

walk through to get ideas. Sometimes, I just hear part of the song in my head, out of nowhere,

and I scramble to get it recorded on my phone. It’s an interesting writing arrangement, because I

write the instrumental parts of the songs from certain experiences or feelings, then Brett will give

them lyrics about something else entirely. It’s been a cool contrast with that.

TSWS: How do you guys write your songs? Is it lyrics first? Guitar chords? How does it work for you?

These days, I write the demos on Garageband. I’ll send out a skeleton version to everyone and

see if they’re feeling it. If so, Brett will record a brief snapshot of the vocals, and we go from

there. I just try to get instruments like synth, guitar and drums in the ballpark and then the guys

add their parts later on. I’m feel very fortunate to be able to write with such a talented crew, they

do such a great job of evolving the songs. The sum truly feels larger than the parts most of the

time with everyone that’s involved.

Thanks for taking the time to listen, it means the world to us. We hope you have as much fun

listening to the songs as we did making them!